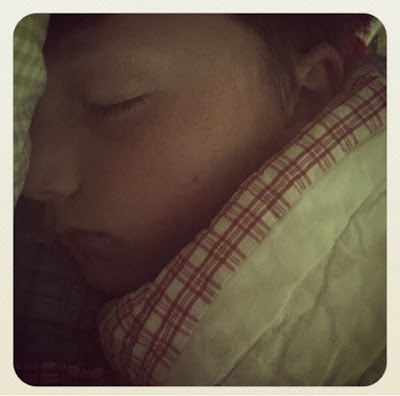 "I will not waste this life, not one hour, not one minute.
I will not take for granted the blessing of our being here...
I will give thanks...”
~ Katrina Kenison, The Gift of an Ordinary Day

Early this morning, I crawled into his little twin-sized bed and snuggled under the dinosaur quilt with him.  I kissed his cheek, my face close enough to feel his breath.  I brushed his hair with my hand, cupping his little face and I thanked God for this - another morning.

My sleep was restless last night.  The whole scene on replay as I slept, against my will.  The "what ifs" whispering incessantly, taunting.  I would wake up, turn over, and try to think of something - of anything - else.

It's all in slow motion, like a scene from a film, I can't really hear anything, it's just the sound of my voice screaming, crying out, "Oh God!  Oh God!" and the pounding of my feet against the ground as I'm running towards him.  Or maybe it's the sound of my heart pounding in my chest, splintering, fracturing with each step.

I'm running towards my son, the one whose hand I'd just held and prayed with hours earlier, as he lay on the ground, an overturned go cart beside him - the engine still humming in the background.

And the questions, coming faster than the sequence of tiny infinities constructing those seconds:  had our whole lives just been altered forever?  When I reached him, would he still be here?  Had I just lost my baby, my only son?  I thought for certain that his neck had been broken, that I'd heard his voice for the last time, his laugh for the last time.  I thought so many things in those moments of sprinting and screaming towards him.  I thought of the conversation we'd just had hours earlier.


On the way to his grandparents' house, we talked about a little girl whose family we had been praying for.  A little girl who lay dying in  hospital bed in Tennessee.  We don't know them, but our hearts are breaking for them.

"Mommy, I feel so sad for them" he said, blinking through tears.  "I do, too."  He placed his little left hand in the palm of my right hand and I prayed out loud as we drove.

For His presence to be in their midst.

And we talked some more.

You know, I tell him, "Death has been swallowed up in victory" (1 Corinthians 15:54).  For us, it has no sting.  His word tells us that to be absent from our body is to be present with the Lord.

I believe, and I tell him, that something supernatural occurs just before we die, and that's why His word tell us that for those of us that are in Christ, we won't even taste death.

And for those of us left behind, we grieve, but we do not grieve as those without hope.

These are the tenets of our faith.  This is what I believe with my whole heart.

But in those seconds, running towards what appeared to be my child's lifeless body, I was having my own crisis of faith, just like the father in Mark 9, "I do believe; help me overcome my unbelief."

It was over as suddenly as it had began.  I collapsed next to him as he began to stand up.  He was miraculously unscathed, as if he'd fallen off a tricycle in the driveway.

My heart was still racing and my limbs were still shaking and I was just trying to breathe.

His words are the foundation for my life.

And come what may.  I'm reminded of the three who refused to bow down to a false God.  Instead they chose to walk into the fire, trusting that God would deliver them.  "But even if He doesn't..." they'd said.  They would not bow down.

And so, neither will I bow down to a spirit of fear that is not from Him.  I will cast my anxiety on Him because He cares for us (1 Peter 5:7) and in all things - in all circumstances - I will give thanks (1 Thess 5:18).

And when I am physically shaken, rattled to my core - I pray that my faith that will never be.