That one time I used to write… 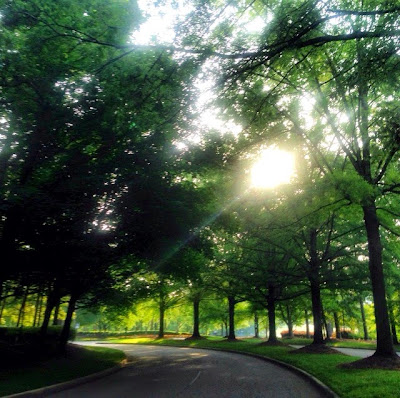 a pause in this morning's run
to catch a glimpse of morning sun
5.23.14

Remember that time I quit my job so I could write more?  Yea, that just happened.  Well, sort of.  I didn't really quit so that I could write more, I'm just hopeful that writing will be a natural extension of the time spent not at work.  Although life has seemingly, drastically decreased in speed since I began the process of "New Year eliminations", I'm hopeful that this new season will lend itself to longer pauses of living this life in the moment.  Of pausing, right in the middle of the race, to take in the glimpses all around us.

And I'm hopefully that I'll write more.  Or at all.

I've been thinking about writing lately.  It usually happens during my morning runs.  It's the best time to think the thoughts and yet, seemingly the most inopportune time to actually collect and remember them.

The come and go, fast and fleeting.  By the end of the run, the thoughts have deteriorated to thoughts of survival and things like the smell of the air conditioning in my car and the taste of orange-flavored Powerade Zero rehydrating my parched throat.   You know, the kind of things not entirely worth blogging about.

After such a long break from writing regularly, I keep thinking that I won't know where to begin, how to bridge the gap.  Sometimes, I think I'll wait until I have something really profound or beautiful to write about, but this morning the thought occurred to me that may never happen - or at least, may not happen soon, that maybe I need to stop waiting for it to happen and just do the thing I've always loved to do and just write about life, without cause or reason, just the way it is today.

I wrote weekly over at Middle Places for a year - I thought this would help keep me in the habit of writing, but in ways, I think it burned me out.  I love those women and the community they have built and continue to build, but the knowing that I had to write seemed to drain some of the longing in me to write.

The thing I loved became the thing I sort of dreaded.  Instead of finding my voice, it felt as though it was becoming more and more contrived and more trivial and so, I had to stop and give it a rest.

I began this year with the intent to eliminate distractions in my life; to eliminate the trivial pursuits so that I could set my heart and my mind on the things that matter most.

"This is what the Sovereign Lord, the Holy One of Israel, says: "Only in returning to me and resting in me will you be saved. In quietness and confidence is your strength." Isaiah 30:15

And so, I've rested in the quietness during this season.  I've rested in His work of restoration in my family and spent moments in silent awe of what He has done.

It's all a work in progress.  And it always will be.  But I'm so ready for this next season.

And I'm ready to write again.

"I have decided that I will not let anything
that will ultimately mean nothing
keep me from that which will eventually mean everything."
~ Pastor Chris Hodges