Giving Thanks: Memories and Moments 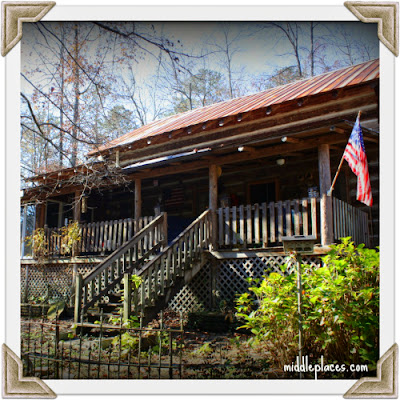 My parents' cabin in the woods - Calcis, AL
As I get older, time seems to move at a much faster pace, as if it's snowballing year after year, gaining momentum.  Sometimes, it's almost as though it's barreling on ahead and I'm running behind, trying to catch it.  I think this is why I love photographs so much, and why my love for photography continues to grow.  I want to capture it all, every detail.  I want to take it all in and, in some ways, a photograph gives me something we all long for: a frozen moment in time.

My maternal grandmother [whom I call mom] was granted custody of me when I was around a year old.  She was a vietnam war widow in her very early forties, having [almost] finished raising three girls of her own.  And so, I spent the first decade of my life in a brick home on a culdesac.  She remarried when I was 7 and soon after, they began secretly plotting our move to the woods.  I say "secretly" because I was, in fact, included on any of these plans, I don't remember it.  I just remember the day we got in the car and drove for what felt like forever to see this old, abandoned structure that they were giddy over.  Long ago, someone had placed shoddy wooden siding over the large, square logs.  The roof had caved in and the floors on the lower level had rotted, exposing the earth below.  Vines were growing up around and in it.  It was 1985.  This was going to be our new home.   Eventually. You know, because being nine wasn't weird enough... My parents labored over the next year on their dream home, tearing it down log by log and having it moved to the twelve acres they'd purchased even farther in the woods.  I remember very little about this time... I remember a yard sale in the cul de sac when our house was on the market.  I remember the anxiety - and dread - of changing schools.  Mostly, I remember the awkward horror of having to live in a tiny camping trailer with my parents in the months between our house selling and the cabin being finished.  My stepdad had taken a year off work to complete construction with the goal of having the original portion of the cabin completely rebuilt and restored by Thanksgiving, 1986.

Now, I wish I could tell you that I have such wonderful memories of that first Thanksgiving huddled in our cozy cabin in the woods.  And I could... but it would be a lie.  The truth is, I have exactly zero memories of that first Thanksgiving in the cabin.  Again, I was ten.  And now that I am the mother of an [almost] ten year old daughter, I can attest to the fact that at that age, you are in your own little world.  If your immediate needs are met, then your mind is often elsewhere. At ten, I couldn't have possibly appreciated their labor of love or the work of my stepdad's hands.  In fact, it would take another sixteen years and his sudden, tragic passing to make me gaze upon that home with new eyes.  By the time I was a teenager, it felt cozy to me.  In my late teens and early 20s, I loved holidays huddled around the fire.  But after his passing, I began to love what the cabin represented to my parents, and to him.  I began to love the fact that, after he was gone, he was still in every part of the home.  The rafters that hold up the tin roof are trees that they cut down and skinned together; the stones in the hearth are ones they hand-selected from the property and lay themselves; they stairs going up to the loft are trees cut in half and the railings are smaller, skinned trees.

Over the years, it became more than a cabin in the woods, and more than just a home.  And I don't have a just one memory that stands out, but thousands.  I cannot choose just one favorite memory, but I can share a favorite moment.  It's the moment before the feasting begins, whether Thanksgiving or Christmas.  All of us, at least twenty in numbers, cram in, circle up, hold hands and pray.

Giving thanks. Always.
"Always giving thanks to God the Father for everything,
in the name of our Lord Jesus Christ."
~ Ephesians 5:20
original post: http://middleplaces.com/2013/11/29/in-the-middle-of-memories-2/﻿
Email Post
Labels: life middle places