In the Middle of Disappointment 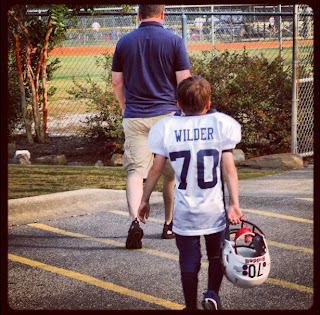 Following his Daddy - literally and figuratively
It seems appropriate that I would write about football this week as it is the thing that is all but consuming our life right now.  This little guy is on the field two hours a day at least four times a week. The lazy days of Sunday soccer and one weekly practice have reached an abrupt end.  We were completely unprepared for the investment of time this endeavor would require.  Parker started training camp in July, then regular practice in August.  By mid-August, they were in full pads and helmets and on the field in the summer heat practicing four to five times a week.  This blew my mind.  You know, because they are seven…
It all just seems too much to me.  Maybe it’s my innate desire to keep my “baby” little.  I took him to one practice and quickly realized that I didn’t have the emotional fortitude to watch the running of the drills, the screaming of the coaches.  The other moms and dads on the sidelines seemed fine. I just wanted to break loose, run out on the field, scoop up my baby in my arms and carry him [like a baby] home.
He is the much more sensitive of my two children and watching him endure such a physically tough sport was difficult.  Frankly, I felt certain that he’d want to quit.  Can I just tell you it would’ve been the first time ever that I’d have let him quit?  We normally have a rule that we will allow our kids to try whichever sport/activity they are interested in with the understanding that they have to complete that particular season.
I was completely prepared to throw that rule out the window – along with the massive amount of time and money we’d already invested. Because it seemed too hard.
Maybe more for me than him…
Because, maybe, that part of me that was so accustomed to fearing and running from that which is difficult and painful is still alive and well within me – and maybe, just maybe, I have a tendency to project that onto my kids.
It was a reminder of how far I have and yet, have not come.  And so, as it often happens in the throes of parenthood, the Lord is teaching and reteaching these lessons all over again.  Lessons of trust, and of perseverance.  The lesson that I can learn in the middle of anything and everything, even little league football, if only I’d let Him.  If only I’d listen.
At the end of Parker’s football game this week, I stood at the edge of the post-game huddle.  Sixteen little sweaty players taking a knee, leaning in to hear their coach.  It had been a very close game and his team had come back in the end for a fourth quarter victory.  It should’ve been a happy moment, but as I looked through the lens of my camera, zooming in on Parker, I saw something I wish I hadn’t: disappointment.   It was on his face, in his eyes.  He was several yards away and though our eyes hadn’t yet met, I could tell by his facial expression that he was fighting back tears.
He hadn’t gotten to play.
He wasn’t the only one.  It had been a close game and with it being his rookie year, there were four or five other players that didn’t get put in, but still – even that knowledge didn’t lessen the blow for him, nor the ache of my cracked heart.
I did that thing that we mamas do, that instinctive feigning of strength, masking my own hurting heart in an effort to comfort his.
It’s a difficult lesson for him to learn at seven.
And for me at thirty-seven.
I felt utterly helpless as we made our way back to the car, his helmet heavy in my hands, my heart heavy my chest.  By the time we were in the car, he was completely over it – laughing and talking with Chloe.  But it would take several days for me to completely get over wanting to “fix” it.  This wanting to shield him and protect him from any and all disappointment.
Chris had told him that it was just part of the game, that he had to keep going strong in practice and giving it his all.  And therein lies the balance in our family, and in our parenting:  Chris’ solution is to persevere.  My solution is to send the coaches, and maybe even the league, a strongly worded email rallying for equal playing time, lamenting the unfairness of it all…
But I keep silent and in what I hope will be a trend for his life, he takes the wisdom of his daddy’s practical [much-less-dramatic] advice and evokes the same quiet strength.  In that moment, I am thankful that he has a father to emulate - one who doesn't react foolishly out of emotion, but is steadfast and solid refusing to get reeled in to any unnecessary drama.  Yes, listen to your Daddy.
Because the thing is, he loves playing football – genuinely loves it.  He doesn’t mind the heat, the pads, the helmet, the hitting, the yelling.

He showed up at his practices this week and gave it his very all, making tackle after tackle, impressing his coaches and amazing his mama… because my seven year old has demonstrated more strength and perseverance in the wake of disappointment than I do at thirty-seven.

The next game, he got to play.  A lot.  He learned the value of persevering through disappointment.  And I did, too.  All over again.
I willingly accept this lesson, in both the little disappointments and painful, tragic trials of this life.  I keep on asking, praying, whispering under my breath and beneath the fear, “Teach me your ways, Oh Lord” (Psalm 86:11).
And He answers me.  Right where I am.
“We are pressed on every side by troubles, but we are not crushed.
We are perplexed, but not driven to despair.
We are hunted down, but never abandoned by God.
We get knocked down, but we are not destroyed.
Through suffering, we continue to share [Jesus]
so that the life of Jesus may also be seen in us.”
2 Corinthians 4