In the Middle of Pressing On 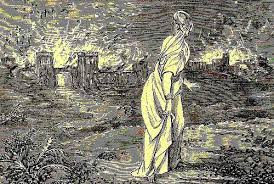 Every day offers us lessons to be learned.  Some days, I am much more willing to learn than others.  And some days, the holy spirit will press something so firmly into my heart that it doesn’t matter how willing or unwilling I am in that moment.  It’s almost always a verse, or a portion of a verse, spoken in a whisper to my heart, yet striking so deeply that it reverberates for days, or sometimes, weeks.
Often it is a simple as “Be still” (Psalm 46:10) or “Trust me..” (Proverbs 3:5), and sometimes, it’s something more.  A few weeks ago, it was that something more and this morning, a few weeks later, it’s still pressing in on my heart, even in the middle of my pressing on:
“Remember Lot’s wife.” ~ Jesus (Luke 17:32)
One verse.  Three little words, poking and prodding.
Oh, I remembered her, alright.  Sometimes, I am her…

“When Lot still hesitated, the angels seized his hand and the hands of his wife and two daughters and rushed them to safety outside the city, for the Lord was merciful.  As soon as they had brought them out, one of them said, “Flee for your lives! Don’t look back, and don’t stop anywhere in the plain! Flee to the mountains or you will be swept away!” (Genesis 19:16-17)

But she couldn’t help herself…

“Lot’s wife looked back as she was following behind him, and she turned into a pillar of salt.” (Genesis 19:20)

The implication is that this woman, whose name is never mentioned, had left her heart in Sodom even as her feet were carrying her away.  But the greater implication is disobedience, despite her reasoning – whether it was cherishing or curiosity… she had been instructed not to look back.
Perhaps the directive would’ve been more effective if she’d been told the consequences of looking back.  Perhaps she’d reasoned that a quick glance wouldn’t be categorized as an actual “look back”.
And isn’t that just the very essence of our human hearts at times?
Sometimes, the Lord reminds us not to look back – for the sake of our very own lives.
And that which He has saved us for is greater than that which He has saved us from.
Whatever you’re in the middle of, remember Lot’s wife… and set your feet and heart on Him, pressing on.

“Brothers and sisters, I do not consider myself yet to have taken hold of it. But one thing I do: Forgetting what is behind and straining toward what is ahead, I press on…” (Philippians 3:13)