on the healing of the hurts... 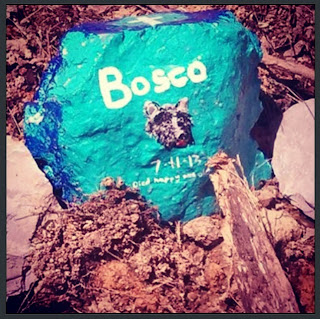 RIP Bosco[e] - 2000-2013
"He heals the brokenhearted and binds up their wounds." ~ Psalm 147:3
My mom's beloved miniature schnauzer passed away last week.  Parker, the [much] more sensitive of my two, took the loss especially hard.  Even as old and as grumpy as Boscoe had become in his old age, he was still adored - especially by Parker.
﻿
Days later, misty eyed, out of the blue he turns to me,  "Mommy, my heart is broken about Boscoe" he says, his voice barely above a whisper.  He's looking down, blinking back tears.  "It will heal", I tell him.  "What will?" he asks, "the sadness?"  I nod my head, "MmHm".
He doesn't ask me how I know.  He just knows that I know.  That is enough for him...
In a less tragic [albeit equally dramatic] event Chloe scalded her forearm recently trying to reach for a microwaved cup of mac n cheese.  She accidentally tipped the cup over and the water splashed onto her arm.  It took a couple of days for the burn mark to begin to appear, and then peel.  It wasn't pretty.  At first, she wanted to bandage it to keep others from seeing it.
"Sometimes, the only way for a wound to heal, is for it to remain open - even at the risk that others may see it" I tell her.
She doesn't ask me how I know.  She just knows that I know.  That is enough for her.
Exemplifying the essense of childlike faith in trusting their mama's words, they each with their own different wounds, accept them as truth.
My words can't offer any real comfort.  They are, after all, just words.  But they can offer them each the hope that comfort will come, that healing will come and the promise of His word, the only words that actually have the power to heal.  I know.

I know because I've experienced it time and time and time again. Physically.  Emotionally.  Spirtiually.
I know because I know the One who heals all things wounded, mends all things broken, and makes all things new again.
Days pass and the damaged layer of skin on her arm slowly begins to disappear. The fresh pink layer begins to turn as golden brown as the rest of her arm.  It's only been a couple of weeks and already, the wound is almost unnoticable.

I hold her arm and run the palm of my hand across the place where the burn mark had been.  It's remarkable, His design, when you think about it.  This healing.  This regeneration.

"Parker, do you see your sister's arm?"  He nods.  "This is what He does with our hearts - and our hurts - and that sadness."

It fades away into the glory of His grace by the holy mystery of His work that we can't comprehend - and if we study it closely, we can't even see.

But I know it to be true.  Those words from my Father.  His promise that He alone is the one who "forgives all your sins and heals all your diseases, and who restores you to health and heals your wounds".

So I pray for childlike faith to trust His healing - and I pray.  Because I don't know how to heal the wounds of others, I only know to point them to the One that does - and give them the promise of His word.