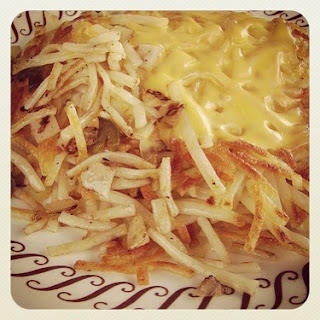 Scattered.
Smothered.
Covered.
Yea.  Life's like that sometimes.....
I’m not much for crowds anymore, not that I really ever was. I could at least tolerate crowded sporting events, concerts, and theme parks when I was younger, but that tolerance – along with my patience - is wearing somewhat thinner as I grow up older.
It’s not that they make me anxious, I just find them genuinely unenjoyable. In much the same way a claustrophobic typically finds elevator rides genuinely unenjoyable. It’s a foggy mixture of both mild discomfort and panic. So yea, I’m finding that I’ve become a much more more of a wide-open spaces kind of girl.
It could be that the more I feel as though the details of this life confines me, the greater the longing is to run free, both literally and figuratively.
You know that saying, the one about being in a crowd but feeling all alone? In our spiritual lives, the very opposite can be true. And here’s the thing: I think we all experience this. I think it’s all a part of our divine design. God knew that we would have moments, seasons even, where even in our solitary, quiet moments, we wrestle with crowded minds – and clouded hearts. In our human nature, we often seek the remedy for this restlessness outside of His perfect provision. In counseling, this is called “self-soothing” and the enemy of our souls presents a plethora of suedo comforts from which to choose - most of which appear utterly harmless. We fill our hands, our hearts, our mouths, our time… until we’re overwhelmed. The ultimate goal of the enemy is always to destroy us, but can I tell you that he’ll settle for hindering and rendering by any means he can.
In an already-crowded heart, the noise level can become unbearable.
And oh, the random acts of mindlessness that often accompany it. You know, thing like not being able to find my keys in the morning, only to discover them hanging in my front door. From the night before. Yea. This happened not once, but twice over the last week. I’ve resorted to asking my nine-year-old for accountability as I try to include making sure the keys are actually inside into my nightly routine.
She giggles and I point out the obvious, the very fact that I am responsible for the overall well being of two little human beings is sometimes a ridiculous notion. We giggle some more. “No, really,” I tell her, “this is why Mommy needs Jesus. Daily.”
I had a conversation yesterday with my sister-aunt (i.e. aunt who is like a sister to me). She affectionately referred to this figurative crowdedness as “Waffle House Brain”: Scattered, smothered and covered.
Scattered. Covered.  Smothered.
I read those descriptive words and the first thing that came to my mind wasn’t a plate of hash browns… It was my heart.
{{Insert pangs of conviction here}}
Had I really allowed my heart to become so disheveled that a plate of hash browns could convict?
Yes. Apparently so.
A crowded mind always leads to a crowded and hurting heart; And a hurting heart always leads us to seek a remedy.
And so, we try and fail to busy ourselves with distraction. We fill our daily lives with activities and chatter. Until we’re full. Until we’re unbearably crowded.
And then, someone mentions a plate of hash browns – and the Lord reminds you of the only remedy we need to seek: His presence.
It’s true: I’ve been a fly-by-the-seat-of-my-pants, over-talkative, hyperactive, extroverted busybody since my preschool days. The very first time the Lord spoke to my heart with unmistakable clarity, it was through His word and it was as clear as if He were physically next to me.
Two words from Psalm 46:10:

It became my life verse and it’s one that I [obviously] need reminding of often. That day, that first time He pressed that verse into my heart, I was sitting amidst the rubble of a sin-wrecked life. I was overwhelmed with trying to pick up the pieces and put them all back together again.


And here’s the thing about sin-wreckage: It’s often filled with so many slivers and shards that He knows we’d only wound ourselves by trying to pick up the pieces.
“Be still and know that I am God”.
And so, He moves us to empty our hands – and our hearts – and be still. Jesus said, “Come to me all who are weary and I will give you rest.”
Do you need to be still today? Whatever you’re in the middle of, however busy, know that there is a remedy for your weary soul and crowded hearts. In His presence, there is peace. Quietness. Rest.
original post: http://middleplaces.com/2013/06/21/in-the-middle-of-a-crowd-2/
Email Post
Labels: life middle places observations