Rest in the Nest 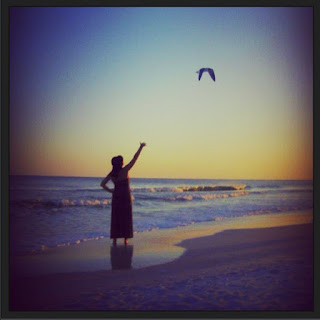 We've flown free from their fangs, free of their traps, free as a bird.
Their grip is broken; we're free as a bird in flight.
Psalm 124:7 (MSG)
I took the photograph above at the beach earlier this year.  My sweet friend Spira was enchanted with the birds along the shore; the assortment of common seagulls that I've grown accustomed to over the years.

The Lord has a way of transforming the ordinary into extraordinary when we allow Him to open the eyes of our hearts and see through the lense of His perspective and His word.

Now I'm not implying there is some great spiritual lesson to be gleaned from even the random seagulls along the sea shore or the sparrow in the shrubs...

"Behold the birds of the air," said Jesus... "They do not sow or reap or store away in barns, and yet your heavenly Father feeds them. Are you not much more valuable than they?" (Matthew 6:26)

The greek translation for behold (ἐμβλέψατε) is so much more than to glance.  It  is a verb that means to become engaged in; to look not only upon, but into - sustained and concentrated.  Don't just look at the beauty of His creation that is daily laid before your eyes, behold it.


And when you do, you just might catch a glimpse of His glory - and of freedom.
His word tell us that He is not far from anyone of us - If only we we are willing to look; and to behold.


As I walk fly farther along this path of His freedom, I find it in the most unexpected places, both around and within myself.  For so long, I was so much like a fledgling that had flown the coop, or rather, one who had foolishly flung herself from the nest.  Furiously flapping and flailing - as if to signal the fowler that I was fresh prey...
Until that day when the Father scooped me up and brought me backed to His nest.  Home, where I belonged.  Fragile and broken.  Wounded and frail. He did not chastise me with words of condemnation or pour salt in my self-inflicted wounds, but He comforted me with His love.  He mended my torn and healed my broken.  He taught me how to rest in the nest of His grace and He hid me in the shelter of His wings.  It is there:
I am free.
I am safe.
A few weeks ago, my kids discovered this tiny nest in the shrubs. Standing on their tiptoes, they would barely sneak a peek before the mama bird swooped down out of the nearby tree, aggressively flapping and chirping.  No one was going to get too close to those eggs on her watch.
Oh, how much closely our Heavenly Father guards us, defends us, protects us and keeps us.  "It is in Him [and only in Him] that we live and move and have our being" (Acts 17:28).
Invariably, in this life, there will always be a fowler lurking about with his trap set before us.  There will always be those who try to lure us into defensive reaction or rebellion, which is one in the same.  And it is there, in both the small and not-so-small battles of this life, we learn - as Moses did - that the Lord will fight for us, we need only be still.
The KJV version says, "The Lord shall fight for you, so you shall hold your peace" (Ex 14:14).
I love that.  Hold your peace.  We have the freedom when under attack or when shaken and vulnerable to hold onto our peace, His peace.

We hold our peace because we dwell in His shelter.

And, we rest in His nest. 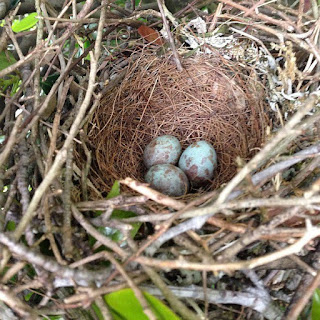 "He who dwells in the shelter of the Most High
will abide in the shadow of the Almighty.
I will say to the Lord,
“My refuge and my fortress, my God, in whom I trust.”
For He will deliver you from the snare of the fowler
and from the deadly pestilence."
Psalm 91:1-3