the cross is greater 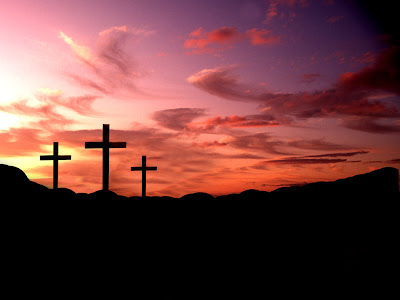 "For the message of the cross is foolishness to those who are perishing,
but to us who are being saved it is the power of God."
1 Corinthians 1:18

This week, I have watched the symbol marriage equality slowly begin to turn the feed of my social media outlets to red and yet, by His grace, I have been reminded of another shade of red, the crimson flowing from His head, His hands, and His feet nearly two thousand years ago today...

The gravity of writing a post to be published on Good Friday was not lost on me. As I sat to write, I felt the weight of both responsibility and my own inadequacy bearing down. For a brief moment, I worried that my words would be insufficient and He gently reminded me that, on their own, they always are. Yet, when fully surrendered to Him, He can use all things - yes even these words strung together by keystrokes fervently moving across the keyboard to the rhythm of my heart, for His glory (Romans 8:28).

In the midst of a cultural war in which individuals are both incessantly quarreling and strategically marketing for the sake of their cause, I began to realize that my heart was growing increasingly jealous for Him, for His glory... and for His cause.

How often we are tempted to forget that we are the ones He has chosen to demonstrate that love to them.

We are the ones who have but one task, spoken from the mouth of Jesus Himself to go and tell the world. He is Risen and the veil is torn. Through the piercing of His body came the tearing of the temple veil. This is a historical fact explained in explicit detail in Hebrews. Every facet of the temple was a foreshadowing of what was to come. Jesus Himself was the veil to the Holy of Holies and through His death, we were granted access to our holy and living God. Up-close, personal, life-changing, heart-altering, eternity-defining, intimate access.

Today, we celebrate the day in which God Himself demonstrated His love for us in that while we were still sinners, Christ died for us (Romans 5:8). For me. For you. For each and every single person standing on either side that which they may deem their greatest cause.

Oh, how I long to shine the light of His word and His Spirit and His truth on all those who are unable to see that they, too, no matter which side of the war which they are standing - they are standing in the shadow of the cross and we are standing together, as both one and equals at its foot.  And as for me, I have decided to sit quiet and contentedly in the shadow of the cross.  I have decided that if my actions and my words are to have any impact on anyone they reach then may it be for the only cause that bears the weight of eternal value. May it be for the glory of Christ crucified and nothing else.

I have decided and resolved what Paul had when he wrote, "For I decided that while I was with you I would forget everything except Jesus Christ, the one who was crucified" (1 Corinthians 2:2).

I have decided that the cross is greater.

The cross is greater than our greatest cause.

The cross is greater than our most controversial issue.

In the middle of this broken and fallen world, and a consumerist culture that will soon enough be engulfed with baskets and bunnies, can I encourage you to stand with me and declare that the cross is greater?

Can I encourage you today, oh especially today, to cast aside your cause and remember His.

Why? Because His cause is the only one that bears the weight of eternity.

There is no cause on this planet or in this life that is the equivalent of His sacrifice for us, the atonement for our sins.  Every human rights movement, every civil liberties debate, and every political agenda will cease upon His return.  He was and is and is to come.

His cause was the cross.

And the cross is greater.

Lord, this Good Friday, may the glory of your sacrifice on the cross eclipse the controversy of our culture. May we be the vessels by which the word of your glory is displayed. Amen.


"As for me, may I never boast about anything
except the cross of our Lord Jesus Christ.
Because of that cross, my interest in this world has been crucified,
and the world's interest in me has also died."
Galatians 6:14