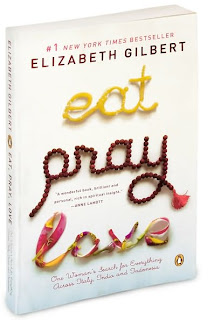 i was flipping through the channels the other night when i came across the end of this movie, which reminded me that i'd read the book, seen the movie, written this blog, saved it in my drafts....
August 5, 2010: elizabeth gilbert's personal memoir has become an international bestseller, a major motion picture and somewhat of a cultural phenomenon - all of which i find intriguing.
i also find it intriguing - if not ironic - that many critics of the book have deemed gilbert as self-obsessed, whining, narcissistic and selfish. the book is a personal memoir which, by definition, is reminiscense of a personal experience, written in first person, from a first person point of view. but, despite the negative reviews, the book has over seven million copies in print and the film has grossed over twenty-three million dollars... in two days.
i read the book several years ago, either in the midst or wake of my own divorce - i'm not sure which. the past is such a blurry montage, but i distinctly remember identifying with gilbert almost immediately: broken. confused. overwhelmed. unhappy. lost. crying on the bathroom floor crying out to a God, wondering who - or where - He was. she abandons her marriage, falls into another relationship almost immediately and further into the brokenness, confusion, uhappiness, lostness... it is a message that resonates with millions, myself included.
yet, this is where gilbert and i part ways, in some ways: i was single mother of two small children who had never finished college and hadn't worked in the corporate world in years; gilbert was an accomplished Manhattan journalist. but our post-divorce journey in seek of fulfilment and identity are so much the same, only i didn't have to go to italy to find pleasure in pasta (or to eat my feelings), i didn't need to meditate in an ashram in india to pray and seek God - my bedroom floor worked just fine most of the time, and while i couldn't afford a bungalow on the the beaches of bali to facilitate my quest for balance, i did spend an awful lot of time on the gulf of mexico...
in hindsight, it's strange to me that i cannot remember anything i thought or felt about the book when i finished it. it's possible that's because i felt nothing... and though her journey had been interesting, nothing about it struck me as profound. that said, i'm not sure why i even wanted to see the film, other than i'm a fan of julia roberts and the previews did look really good... and so, i sat through the film. all two hours and thirteen minutes of it. unlike when i had read the book initially, i no longer identified with who this woman was, but rather, saw such a clear depiction of who i had been and where my own journey had taken me (withouth the passport stamps).
the closing scene of the film shows her sailing into the sunset off the coast of Bali with her Brazilian lover (who is now her husband).
by all accounts of the world's standards, this is the eptiome of a happy ending... isn't it? at one time, in the not so distant blurry past of mine, i might have sat wide-eyed through that ending scene, eyes brimming with tears and heart brimming with hope. instead, my heart is burdened and saddened... because i have new eyes to see, new ears to hear and a new heart to love - all of which no longer work in accordance with the standards of our world, all of which see the tragedy in this one truth: this woman's yearlong personal oddyssey across an ocean and through three countries closes with her having found a god that offers some self-acceptance and the love of a man... but ends without her ever having found the only source of lasting peace, healing and true love.
at the end of the book she writes what she says her "heart" spoke to her "mind", saying "i love you, i will never leave you. i will always take care of you."
and I can't help but wondering how close she came to hearing God Himself whisper to her heart through His word: "Never will I leave you; never will I forsake you." Hebrews 15:5; "I have loved you, my people, with an everlasting love. With unfailing love I have drawn you to myself." Jeremiah 31:3
the truth is that he still longs to speak that to her and the tragedy is that she could've shared that truth with millions of women who long to know the ONLY one true love.
Email Post
Labels: divorce love and marriage media observations the blogger in me