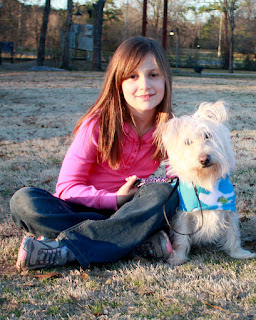 Our sweet little girl turns eight this week.  Eight.  Sigh.  I don't even know what to say about that, because if she's turning eight and her brother just turned six that means that I am (gulp) thirty. plus five.  I'm coming to terms with the fact that my children are old enough to verbally reprimand me for publicly referring to them as "my sweet babies" while also coming to terms with the fact that I may never have any more "sweet babies" of my own.  Deeper sigh.  Not that I'd ever actually planned to.  After all, anyone who knows me knows that having my two in the span of twenty-two months sent me straight to the edge of my very sanity.  It's just that with the passing of each year, I can see that possibility begin to fade away.  And so, I'm learning that lifelong, never-ending lesson to accept the things that may not be meant to be... and simply trusting in His will.

If there is one underlying theme of every life lesson that I try to teach my children, it is the truth of Romans 8:28: "... God causes everything to work together for the good of those who love Him and are called according to His purpose for them." It is a lesson - and a promise - that I'm still learning and learning to trust in, too.  One I wish I had known when I was eight...

A few nights ago, Chloe & I were in her room talking about all things eight when I tell her what I can remember about being eight.  Frankly, it wasn't the best of years for me.  My mom had recently remarried and I hadn't been too happy about it.  Later that year, in the middle of third grade, my step-dad had taken a contract near Augusta, Georgia and we moved there temporarily for the duration of the contract.  I'd never been away from home.  I'd never been away from the kids that I had known since preschool.  Within the span of a year, my entire life as I had known it was radically altered.  We came back home my fourth grade year and I was thrilled to be back in our house, in my old room, at my old school.  What I didn't know is that my parents were already planning our next move.  A permanent one, to their dream home: a log cabin in the woods. A far cry from the brick ranch on the cul-de-sac.  I don't remember actually voicing much opposition as the plans unfolded.  I don't remember much of anything other than it happening and moving and the dread and fear associated with it all.

As I'm retelling this all to my own daughter, I begin to remember what I felt inside during that time in my life:  Loss.  Sadness.  Fear.  Confusion.  Anger.  Oh, the unfairness of it all!   Why didn't my parents ever think about what was best for me?  Why didn't they think of me at all?  Trying not to delve too much into the misery of it all, I reassure her that, "Oh, it turned out alright... eventually." I went to the new school, made new friends, tolerated life in a cabin.  I grew up to have lasting friendships and a nostalgic love for the cabin where my family spends all of our holidays.  "But, Chloe, that's not the best part", I tell her, "all the while, God was moving all those pieces and people and things together for my good, to give me a perfect gift that was better than anything I could've dreamt!"  Her big brown eyes open even wider and she looks into mine, "ooh, what was it?" she asks, very seriously.

"Because, you see Chloe, if Nana had never remarried and if together they hadn't had a dream of a cabin in the woods, we would have never moved into that home and I would have never went to that school and that school is where I met your daddy.  Through all of those years, God was planning and orchestrating to bring you into this world - and I never even knew it."


Twenty-six years later, I can see so clearly His hand moving through every moment.  Every disappointment.  Every failure.  Every heartache.  He was working in all things, even all things eight.  Every year of my childhood, and of my life.

I realize that what I've just spoken to her is the same thing God is speaking to me.  During the darkest seasons of our life, in the midst of chaos, confusion, despair - He is there - and He is working all things together.

"For I know the plans I have for you,”
declares the LORD,
“plans to prosper you and not to harm you,
plans to give you hope and a future."
- Jeremiah 29:11
Email Post
Labels: mommyhood the narrow path