the next step: part two. 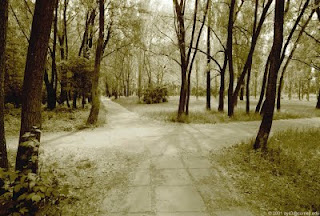 "When my spirit was overwhelmed within me,
then You knew my path."
Psalm 142:3
Isaiah wrote that, "Whether you turn to the right or to the left, your ears will hear a voice behind you, saying, 'This is the way; walk in it'." I can remember, as a teenager and new believer, being overly inquisitive about God's will was for my life. I wanted a road map, an instruction guide. If only I'd known that both were freely available to me through His Spirit and His word.
I wanted to know His will for my life for me (read: for my own benefit): things like who I was going to marry, what I was going to do for a living, where I was going to live, etc. etc. etc. Instead of seeking a deeper relationship with God and His truth for my life through His word, I wandered aimlessly doing all the things that I thought I was supposed to do: I got a job. I took college courses at night. I got married, we bought a house, we started a family. I constructed a life that seemed ideal and ultimately, I had chosen a "way that seemed right - even appeared right to others, but in the end led to destruction" (Proverbs 14:12).
At thirty-two, I found myself feeling exactly as I had at twenty-two: directionless. Desperate. Utterly lost. At fifteen, I had began wondering what God's will was for my life, but it would take another twenty years for that question to change where I no longer wanted to know for my own personal comfort or benefit, but for His glory. As I moved into my last semester of this journey to finish my undergraduate degree, I was overwhelmed with gratitude that I had the opportunity to complete my education. I had trusted in His purpose the entire time, but still not knowing or having any direction.
I had several ideas a long the way about what I would actually do with my life, many of which involved things that I enjoyed, like Public Relations and Social Media strategy. Companies actually pay people to manage their Facebook and Twitter accounts. If that isn't up my proverbial alley, I don't know what is. In all honesty, after living as a single mother and college student for the last couple of years, the thought of having an actual full time salary with benefits was lucrative. But, the more I began to contemplate moving in that direction - and praying about what I was supposed to do - the more I knew that wasn't it. Confirmation came when I had the opportunity to interview with one of the best companies in Birmingham. Initially, I was thrilled - but during the few weeks between initial call and beginning the interview process, I began to have more than just the inclination that this wasn't the direction I was supposed to go. I began to have a leading to go in another direction entirely...
I'm at a loss for words when it comes to articulating how this all conspired. Off and on throughout the last few years, even before I returned to school, I had thought about the field of counseling. I often joked that I had been through enough counseling on my own that I should recieve a certificate of some sorts. Suffice it to say, the thought had been in my mind (and perhaps, my heart) for a long time. I began looking at the graduate programs last fall and told myself that I had plenty of time to decide. I kept putting off praying about it. Part of me was afraid of the answer. Part of me felt that it was too late. Another part of me doubted my ability - or credibility - to pursue studying counseling, of all things. (The Lord certainly has a sense of humor.)
Although I began praying (somewhat humorously), "Oh, Lord, please don't call me to go to graduate school", my heart was aligned with that of the Psalmist who wrote, "Cause me to hear Your lovingkindness in the morning, for in You do I trust; cause me to know the way in which I should walk, for I lift up my soul to You...in You I take shelter. Teach me to do Your will, for You are my God." (Psalm 143:8-10). I didn't know immediately what I was to do, but I did know that I had invested too much time and money in pursuing my eductation for my own benefit, my own comfort. The desire of my heart had become to pour my life out doing something that allowed Him to use me, to make a difference in the lives of people, to share the hope and the LIFE that He had given me. I realized that although He had used this college journey for my good, more than that - He still desired to use me for His glory. It was a humbling realization and once I surrendered to that calling - confirmation came. (read about it in part three)
You will show me the path of life;
in Your presence is fullness of joy."
Psalm 16:11