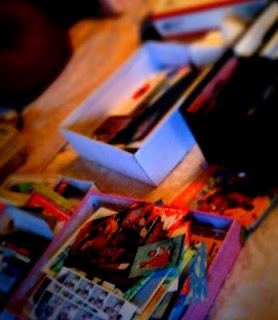 unpacking. 1.10.11
"for others (read: me), some unlearned necessary life skills
[moving on, letting go, saying goodbye]
are all packed neatly among the chaos and mementos.
inevitably, at some point, you have to make the decision to unpack."
blog entry from july 31, 2008

the more things change, the more they stay the same. i've never quite understood that french proverb until now, until my own life experience has given it definition. the more things change, the more [I] stay the same...
it's a strange thing to feel as though you are belatedly making profound progress along the pathway through the matters of this life only to come face to face with how far you have not come. the irony is that as i was writing that entry - and so many others like it - on the ambiguous topics of unpacking and letting go, i was unwittingly doing exactly what i was describing: packing.
the last few years of my life have moved along at a rapid pace. anyone who works any job outside of the home and as a mother inside of the home can tell you: there are never enough hours in the day. Christmas break was truly a break; a long-awaited, much-needed break. having moved in the middle of my first semster back in college early last fall, there were still boxes lining the shelves of my garage, disarray in my attic, unorganized chaos behind every closed door. we may have spent the majority of that two weeks in pajamas, but it was productive pajama time.
i was an avid scrapbooker when chloe was born and her multiple albums were lined along the top shelf next to parker's single, half-finished baby album. they were a constant reminder, looming on the shelves overhead, causing pangs of guilt any time i caught a glimpse of them. for the most part, i learned to ignore them; to not look up. to not look back. i never stopped taking photographs of my children, but it's been years since i actually printed any on a regular basis. oh, i post some on facebook, store them all on an external drive, but sometimes i feel guilty that i'm not doing more to document their childhoods. for years, i've been saving their preschool artwork, mementos and a few photographs, not having any real plan for how i was going to preserve them, shoving them in accordian file here, boxes there... chaos everywhere.
over christmas break, having cleaned every other nook and cranny and cabinet, i reluctantly took every file, every shoebox, every random stack of papers and photographs and piled them up in an empty corner of my bedroom. within my sight. within my reach. a place where i could no longer ignore them. i'd work on them one by one, as i had time. that's what i told myself. i sat down in the floor, took the lid off the first box and started weeping. i placed the lid back on and pushed the box back into the corner.
there, alone in my bedroom, i sat staring at them for some time, feeling monumentally overwhelmed. i didn't know where to begin, or how. (i suddenly felt a strange sense of empathy for hoarders.) inside each box was not just simple drawings and photographs and mementos. each box contained remnants of the last four tumultous years of my life, of our lives. remnants of what was, of what could have been. all too painful to behold, to touch. i wanted to remember. i wanted to forget. but mostly, i just wanted to go back. to have every moment back. i imagined myself as an old woman sitting in the same corner of the same bedroom. only instead of a dozen or so boxes, there were hundreds. maybe thousands. stacked and lined, carpet pathways winding through. i take the lid back off. i am going to do this.
i sorted through each box, one by one, stacking papers and drawings and photographs by year: 06, 07, 08, 09, 10. periodiocally, i'd stop to sob. and grieve. a defining moment of what happens when we, as humans, construct our own [failed] coping mechanisms. we run and hide, surpress and oppress, repress and deflect. we strive so hard to muster up that elusive optimism, to "always look on the bright side of life", you know, silver lining on every cloud and such. the truth is, aside from the occasional wallow in self-pity, i've spent far too much time forcing optimism and repressing sorrow, packing it away and ignoring anything and everything that risked bringing it to the surface. and now here it was, laid out before me. precious mementos overshadowed by the memories of who i was during those moments that i missed; sweet little smiles overshadowed by the pain and turmoil that was running underneath. i hadn't just opened the lid of a shoebox, but on the proverbial floodgates of my heart. but as i sifted through things, it became easier, the tears less frequent. it seemed at some times through those years, i was very particular regarding what i kept and at other times, had no discretion at all. as i begin filling trash bags with things that were not important or relevant, i realized that i had held onto and packed away far more than i ever needed to... 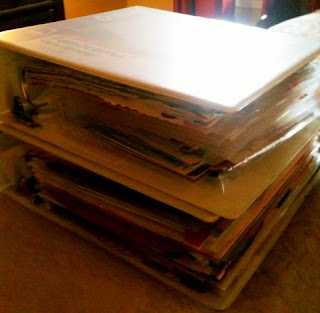 five years worth of artwork and memories in two binders

later that evening, i threw the last of the empty boxes away. two extra large trash bags and two extra large binders later, five years worth of artwork and mementos were stored in page progectors and filed neatly in chronological order. the corner of my bedroom was clean. and so was my heart.

one of my [many] favorite lines in The Princess Bride is when Wesley says to Buttercup: "Life is pain, Princess, anyone who tells you different is selling something". I wouldn't necessarily agree that this life is pain, but pain is certainly a part of it. which makes me all the more thankful that the day is coming when "He will wipe every tear from their eyes, and there will be no more death or sorrow or crying or pain. All these things are gone forever. And the one sitting on the throne said, "Look, I am making everything new!" And then he said to me, "Write this down, for what I tell you is trustworthy and true." " (Revelation 21:4)