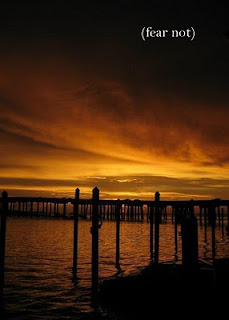 sunset @ destin harbor 8.22.10
"The heavens proclaim the glory of God.
The skies display His craftsmanship.
Day after day, they continue to speak.
Night after night, they make Him known."
Psalm 19:1
Throughout the last year, I have had moments in my life that we humorously refer to as "magic moments", although they could more aptly be described as divine appointments. Moments in which, by absolutely no pre-planning or will of my own, I ended up somewhere unexpectedly or at the very last minute and as a result, became a witness of something incredible. Sometimes it has been something purely external; at others, something purely internal. This particular sunset was one of those moments where it was both: A lifetime spent at the beach, various trips to the California coast and the Caribbean and I have never seen anything like what I witnessed on that pier in Destin, Florida. It was one of those moments where your mind cannot comprehend the beauty your eyes are beholding. It had been a rainy, gloomy day at the beach and, if the sunset on my right weren't enough, when I looked to the left, this was on other side of the harbor: 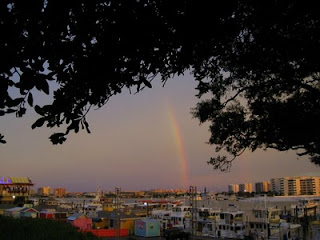 At that moment, this rainbow shooting down from the sky was not just a reminder of the covenant that God made with the earth in Genesis 9; but the covenant in which He made with me: As I watched the final ray of light sink into the horizon, I knew in my heart that God had appointed it; it was one of those things in life that was part of His divine plan. I thought of all the various circumstances that almost prevented it. It was the first time [in my life] that I had decided to leave from a beach trip a day early and had I not made that decision at that moment that I did and left at that exact time and stopped at that exact location... I would have never known or seen this one thing that I will not ever forget. During a season of uncertainty in my own life, the skies were proclaiming His glory to me, His perfect provision. The One the wind and waves obey is worthy of my trust.
I was reminded of the truth that nothing - no circumstance, or sinful choice, or wrongful action; no scheme of the enemy - can thwart the will of God, not in the grand scheme of humanity and not in the intimate details of our lives: He is faithful, even when we are faithless. Not only in the big things, but in the little is well. He is a God who is truly concerned with the intimate details of our life - and that is truth I have continued to experience over and over and over.
In His infinite wisdom, truth be known, He knows I can use the constant reminders: Having made so many poor choices in my own life, I often find myself paralyzed by fear. Trying to embrace the life and provision He has given me in one moment and refusing and rejecting it in my next breath. In my heart, so often riddled with anxiety, God often speaks the words and writes them in the skies: fear. not.
"Fear not, for I have redeemed you;
I have summoned you by name;
you are mine."
Isaiah 43:1
Email Post
Labels: the narrow path