press in. press on. 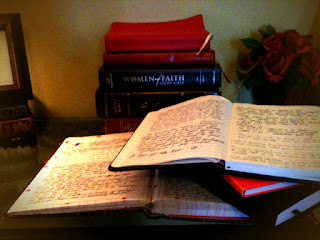 my stack of journals. and bibles. 12.31.10
"I do not consider myself yet to have taken hold of it.
But one thing I do: Forgetting what is behind
and straining towards what is ahead, I press on..."
Paul, Philippians 3:14
I have a confession to make: I’m actually writing my New Year's post on New Year’s eve. (Sigh) I’m such a creature of habit, always trying to get a preemptive strike on the New Year before it begins: putting away Christmas décor, cleaning and organizing closets, starting a new prayer journal, finally putting the old one [that looks like it belongs to a fifteen year old] away. Despite my past failed attempts at changing to a new journal, I’d been saving a very "grown-up" solid black leather one for a while – you know, just in case I grew up. This morning, New Year impending and all, it just felt right. Not that I felt more grown up, just ready for the next step in that general direction. In the process of cleaning out, I found a couple of the new, barely-used journals. Invariably, I’d only written a couple of pages in each and the last my last attempt at switching to a new one was exactly one year ago yesterday: 12/28/09.

David Platt once said that the “twofold theme of Christianity is falling and rising again.” That is certainly the theme of my journals, and of my life, and of my relationship with the Lord as a whole. But, I’m beginning to realize that is true of all of us. I am increasingly grateful to Christ for that in Him, “there is no condemnation”. That verse has ever-renewing meaning to me, even this morning, as I thumbed through the pages of my journal(s), there was no longer condemnation and shame over the gaps of time, conviction and regret – yes, but rather than tears of sorrow over blank pages, there were tears of humbled joy over the hundreds of pages that have been filled by Him. Page after page of confirmation that it is He who is writing my story, it is He who is the “author and perfector” of my faith and whether it’s been a day, a week, a month since I sat quietly at this table and truly sought His face – He always brings me back.
In that same message, Dr. Platt also said, "the only thing consistent about me is my inconsistency". Um, yea... I have a sneaking suspicion that my inconsistency and David Platt's inconsistency are on two completely different realms. Nonetheless, I no longer bang my head against my kitchen table lamenting that I am “never going to get this thing right”… because I’m not ever going to. None of us are. We sin, we fall short, we stumble – we fall; and by His grace and mercy, rise again. He who calls us is faithful. (1 Thess 5:24) And He comes after us, not just the first time, but time and time again. He is the shepherd who will leave the flock to seek out the one who is lost; the one who has strayed.
When I was six years old, I woke up early one morning not wanting to go to school. The best plan my feeble, first grade mind could concoct was to simply hide from my mother. I honestly believed that if she couldn't find me, she would eventually just give up, go on to work and I'd get to spend the day home alone watching tv and eating cereal straight from the box. Genius. Needless to say, that didn't go quite as I'd planned. Had she not found me, my mother would, in all likelihood, still be looking for me today. Twenty eight years later. How much more relentless is His pursuit of us...
I've always wondered if Adam & Eve misjudged God the way I misjudged my mom at six when, in their shame, they attempted to hide from God. Hide. From God. Sounds ridiculous, right? – until we find ourselves hiding, not behind fig leaves and bushes, but within the shadows and busyness of our own lives. With six billion people in the planet, it's slightly easier for us to buy into the deception that God geniuinely doesn't notice us. We use distractions as tools for denial: we focus on the outward to avoid the inward; obsess over the temporal to ignore the eternal. But, God came looking for them, He called out to them. He came after them. If nothing else, my tattered, inconsistent life is living proof that He comes after us.

The faithfulness of God is a beautiful mystery. As Spurgeon said, “I am certain that He chose me because I would have never chosen Him; and I am sure that He chose me before I was born, or else He never would’ve chosen me afterwards.” This is certainly true of me. For so long, my prayer for my children was that they choose Him and love Him. Now my prayer is constantly petitioning the Lord to choose them; to call them – and that it is His will they be responsive to that calling, that they will love Him “because He first loved us”. (1 JN 4:19) We choose Him only because He chooses us first.

It is with humbled awe one comes to realize that any longing for the Lord, any conviction within us that creates this desire to know Him and love Him and follow Him… is actually from Him. “You didn’t choose me. I chose you. I appointed you to go and produce lasting fruit.” (JN 15:16) When we see His heart for us, He uses that to incline our own hearts to Him. We long to stay instead of run, to abide instead of [attempt to] hide. Jesus’ words to us are this: “As the Father has loved me, so I have loved you. Now, abide in my love” (JN 15:9).

The end of the year is always a time for forced self-reflection; contemplation of the path through life in which we are traveling; our goals, our hopes, and our dreams for the future. My prayer for the new year – for my life in general – is that I learn to abide in Him, press in. Press on. No one understood this better than my beloved Paul. So much like me prior to his own conversion, so much unlike anyone else afterwards. He knew that Christ had taken hold of him and that He was never letting go. Paul had a clarity few of us can grasp: he considered everything else in this life rubbish. Everything. Rubbish. He wrote that he considered "everything a loss compared to the surpassing greatness of knowing Christ Jesus". Two thousand years ago, I seriously doubt that Paul was sitting at his desk forcefully contriving a list of self-fulfilling goals for a sucessful and happy new year. For him, there was only one goal... and it had nothing to do with what this world we live in relates to "happiness".

He knew the one thing, the only thing, that really mattered was the one thing; the one relationship; the one true love that will last forever.
"Not that I have already obtained all this, or have already been made perfect,
but I press on to take hold of that for which Christ Jesus took hold of me."
Phillipians 3:12
Email Post
Labels: life the blogger in me the narrow path