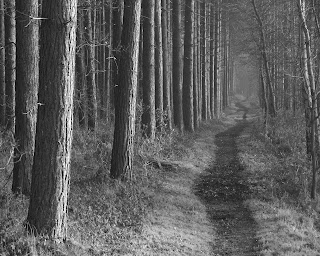 There is a path before each person that seems right, but it ends in death.
Proverbs 14:12 (NLT)
I was running (and I use that term lightly) this morning on the small, narrow “nature” trail/track that is on the grounds at my gym. It winds and loops around through trees and brush so thick that once you take off, you can never quite tell exactly where you are or how far you've gone, or for how long. I was so focused on trying to keep going that I didn't really care, but eventually things began to look familiar and I got that sense that I was nearing the point in which I'd started and I thought to myself,

I try not to spend too much time looking back at the words I've written, both in my journals and on the pages of this blog. I don't know if it's because so much of it is painful or if I don't want to be reminded of how very far I have not come. Probably both. I've amassed a stack of journals in my ongoing (and failed) search to find the perfect journal. I find myself perusing the aisles in search of one that's both durable and pretty (but not too cutesy) and just the right size. If I had to guess, I'd say I've probably purchased about seven journals over the last two years... and yet, I keep coming back to the one that started it all in January of 2008. It would be another 18 months before I would truly surrender my life to the Lord and this journal chronicles that struggle, the periods of surrender and periods of abandonment, the constant running away from home and back again... all marked by large gaps in time.

Its tattered and torn and rather juvenile looking on the outside with its brightly colored stripes and polka dots contrasting against chocolate brown. But what is on the inside, scribbled among the pages is the beginning of a story from which I cannot walk away. Every time I begin a new journal, the memory or the sight of the old one begins to haunt me. I thumb through its pages filled with black ink on hot pink lines an come to the middle where the ink stops and page after unfilled page begins. And I find it strange that none of the other blank pages in any of the six or so other journals bother me. But this one, it weighs on my heart, drawing me back in. Perhaps it's because this is where my journey began... and it's unfinished.

“He who began a good work will carry it on to completion...” Philippians 1:6

There are two kinds of people in this world: those that choose to follow a path through life according to their own wisdom, their own truths, their own feelings, oftentimes mixed in with the pragmatic and logical reasoning and advice of others... and then there are those that, well... do not.

“Whoever is not with me is against me, and whoever does not gather with me scatters.” ~ Matthew 12:30

Admittedly, I've been a little nutty lately. I've had a lot of trouble deciding which kind of person I really am. The truth is, I've wasted a lot of time trying to be both. I've found it's relatively easy in the chaos of life to start ignoring God. Oh, it isn't intentional, but we allow His voice, His word, His spirit to get drowned out by everyone – and everything – else, mixing their truths with our truths, His wisdom with worldly wisdom to the point where we find ourselves where we began, questioning which path we are actually on, which one we take from here, which truth to follow...

Last night, I felt that old familiar calling to the tattered brown journal. Again. Reluctantly, I picked it up, but this time, I didn't just thumb through it. I read... and I wept. Recognizing the landscape of where I am, realizing it is where I began. Amidst the chaos and craziness of my life, He speaks to me all over again through Psalm 46:10: "Be still and know that I am God".
In January of 2008, I had no idea how to walk the path in which God was calling me to. My head and my heart were so wrapped up in my own personal feelings and thoughts and desires and so torn between the my own wisdom and the wisdom of the world and the advice of others. Last night, in July of 2010, I felt so much of the same... and frankly, a little nutty. "Lord, I'm no longer sure which voice is yours, which truth is yours, which truth is mine, which truth is theirs, which truth to follow...". Silence. And there, in the very first entry of the very first day of this journey ... it was written:

Walk in the truth of MY WORD.