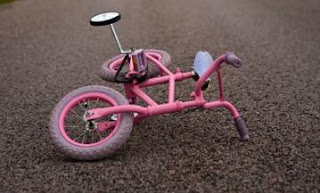 "He heals the broken heartened,
binding up their wounds."
Psalm 147:3
i had a terrible bicycle accident when i was seven years old. admittedly, i never really mastered the whole bike riding thing - mainly because i was self-taught. i can remember riding up and down our street and instead of turning the handlebars when i needed to turn around, i'd panic and just let the bike fall over while simultaneously trying to jump off of it. lots of torn jeans and scraped knees later, i eventually figured it out. it was a saturday afternoon. i was visiting some friends from school. twins. karen & kathryn. they were identical, but one was a tomboy and the other was girly, which is completely irrelevant. i didn't have my bike with me so i'm pretty sure we were taking turns on the bikes, going up and down the street. i remember thinking what a great job i was doing, as if pedaling up and down the street were some great feat. wind in my hair, smile on my face. and then, that dreadful feeling that i was losing control. gravel. pothole. darkness. total and complete darkness. it was the only time i have ever been knocked unconscious in my life. i came to in their bathroom, the twin's poor mother panic stricken trying to clean the blood of my face. only i didn't immediately recognize her because i had no idea where i was. i had no idea who i was.
yea. life's like that sometimes.
there have been days, many days, since i took the first step on this path that i have allowed my attention to wander momentarily. caught up in the busyness of my everyday life, or the selfishness of my human nature, i begin to [foolishly] think i've got this part under control. in those blurry, busied moments my focus shifts and along with it, some undefined part of me shifts with it: from dependence on Him to self-reliance... and then, i "come to" - face down on in the dirt, having never seen the gravel or the sinkhole in my path.
i'm often reluctant to revisit my past postings for fear of painful reminders from where i have traveled. but then there are moments, like today, when in a quiet whisper i say, "Lord, I need to know you are still there". every word i have written becomes evidence of His presence, of His relentless pursuit of my heart and His unyielding love for me. for me. for me! this is the love that transforms lives. this is the love that calls us out of darkness and into light. this is the love that draws us to obedience and causes disobedience to break our hearts.

when i came home all bandaged and bruised from that bike accident, if i'd had a father waiting for me, i would've likely curled up in his lap. a father's love could not have prevented that fall, but the depth of his love certainly would have compelled me to run to his arms and helped heal those wounds.

yea. God's love is like that.
for me. for you. run to it.
"How great is the love
the Father has lavished on us,
that we should be called
children of God!
And that is what we are!"
1 JN 3:1
Email Post
Labels: the narrow path