"by the power of God, who has saved us
and called us to a holy life—
not because of anything we have done
but because of His own purpose and grace."
2 Timothy 1:8-9
i was asked to share a devotional with my small group this last week. initially, i thought it would be as simple as pulling up a recent blog or sharing a specific scripture that had been on my heart that week. but as i began to think and pray through preparation, i realized that either of those things felt... contrived. this was an opportunity to share with my faith family and the more i tried to come up with something on my own, the more i began to realize that the Lord was calling me to share something else entirely: my heart.
the dilemma then became how - in the span of a few short minutes - could i even begin to share the inestimable transformation that He has worked in my heart and in my life? to compartmentalize any facet of His work in me seemed an impossibility; to focus on just one aspect seemed too difficult a choice. time was running out and just as i do every time i sit down to write, i simply prayed, "Lord, you're going to have to move my fingers - and my heart - for me."
it was new year's day. and on a blank sheet of journal paper i simply wrote the phrase, "Happy New Year". there. that was a good start. i paused and studied the the phrase for a moment. something was not right. instinctively, i drew a line through the word happy and instinctively, wrote another word in its place:

the beginning of a new year is - for me - a time of both reflection and looking forward. for years, i'd lived in the the pursuit of my own happiness fully believing that it could be obtained through the means of the world or the affection of others.
it was my selfish pursuit of my own happiness that ultimately destroyed my life and along that path of destruction i fell prey to the deception - and two of the biggest lies - marketed and sold by both the world and of the enemy:
LIE #1: God wants me to be happy.
LIE #2: I can walk in willful disobedience and still be "saved by His grace".
i lived my life, not according to God's truth, but according to these two lies. living by them gave me a "free pass" to live my life however i wanted to live, pursue whatever i wanted to pursue. a little over a year ago, as my divorce was finalizing, i thought that would bring relief... peace... freedom. instead, it brought the exact opposite: turmoil. despair. bondage. and somehow, by something i cannot explain or define, this happened in my heart... 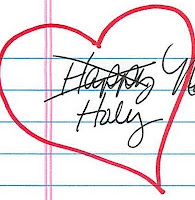 my pursuit of happiness has been radically altered; radically replaced by the pursuit of holiness, Christ Himself. He replaced my longing for happiness with a desire for His holiness and He replaced the lies of the world and of the enemy with His truth:
Truth #1 - God wants me to be happy holy.
Truth #2 - His grace is not permission to live against His will; but rather His grace transforms our hearts so that we desire obedience.
how did this happen? i have no idea. there is a passage in the book of John where Jesus is teaching Nicodemus about what it truly means to be born again. Nicodemus, much like us, cannot fathom what Jesus is talking about... and Jesus says to him, "The wind blows wherever it pleases. You hear its sound, but you cannot tell where it comes from or where it is going. So it is with everyone born of the Spirit..." and so it is with me.
as i shared this with my faith family - those who have truly become my brothers and sisters in Christ - i realized that this was not simply the part of my heart He was calling me to share with them, but a written and visual reminder to me of what He has done for me and to look forward to a Holy New Year...
"Forget the former things; do not dwell on the past.
See, I am doing a new thing!
Now it springs up; do you not perceive it?
I am making a way in the desert
and streams in the wasteland."
Isaiah 43:18-19
Email Post
Labels: post-divorce life the narrow path