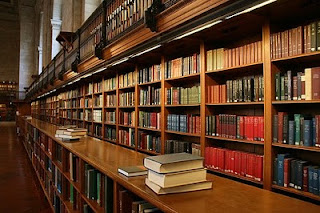 "Where is the wise man? Where is the scholar?
Where is the philosopher of this age?
Has not God made foolish the wisdom of the world?
1 Corinthians 1:20-21

it has been an interesting (and entertaining) return to college for spring semester this week: i briefly contemplated buying myself a "UAB MOM" sweatshirt; i have a classmate who, in a senior level course, publicly referred to the Spanish language as "speaking Mexican". i'm studying alongside kids who were in junior high when i was a junior in college; i have a "communications" professor who has been married a half dozen times, literally: six times. the irony that this man is my guide into a deeper understanding of human communication makes me giggle. i opened my laptop earlier today to write a detailed, witty recap of these things and more, but by the end of the day, something much deeper had already begun to stir inside of me and though i could write a blog - or a book - about it, i was reminded that this college experience, even in its most entertaining moments, is not the central focus of my life. it's simply a part of it. one that will soon pass. only not soon enough...
being a full time student in my thirties provokes a lot of questioning: why i've decided to finish college, what i plan to do with my degree, what i want to be when if i grow up. i've learned to just shrug and smile, which seems to both insinuate and appease: it insinuates i, myself, have absolutely no idea what i'm doing (which, as we know, isn't completely false) and it's appeasing in the sense that people don't care anyway, not really. the real answer, of course, is both too ambiguous and too complicated. the answer is: i don't know the purpose, i only know there is a purpose... and whatever it is, its not about me. ((shrug)) ((smile))
this semester has also placed me face-to-face [in two classes] with a publicly professing non-believing professor who has "the religiosity of an old pair of shoes". most of the time, i find such blatant honesty refreshing. his disclaimer was so very disarming and nonchalant, the same way you'd imagine someone saying, "and, by the way, i'm not very fond of that shade of green" or "i like ketchup but not tomatoes". i'm certain this is because he has recited this phrase many times over the course of many years, prefacing the class with the promise of subjectivity; and the understanding that any discussions on anything related to Christianity are not aimed to either indoctrinate or undoctrinate. after all, we're studying language and human thought here.
atheism and agnosticism are commonplace in this realm it seems and understandably so: a man becomes so lost in his pursuit knowledge and wisdom (what Paul called the "wisdom of the world") that his intellectualism and understanding of the revelation of man increases, all the while his capacity for seeking and understanding the revelation of God somehow decreases. . .

"If our gospel is veiled, it is veiled to those who are perishing. The god of this age [satan] has blinded the minds of unbelievers, so that they cannot see the light of the gospel of the glory of Christ." 2 Corinthians 4:3-4

as he began his lecture, i began to feel strange, ongoing pangs of empathy for this man with an obviously brilliant mind. i heard the words that he was saying, but as the time passed - at the risk of sounding crazy - i also began to hear the words that he was not saying. much of the course, at least in the beginning, is focused on the writings of St. Augustine, who sought to dignify the intellectual foundations of Christian thought through his writings, defining language as something that is mental, rather than physical. but he spoke of Augustine with such passionate fascination it was hard to fathom how - in reading Augustine's plethora of works - he hadn't been persuaded. He spoke of his affinity for reading the King James Version of the bible because of its prosody; he referenced [the book] the Jesus Movement and made mention of his fascination and theories on how Christianity survived throughout the centuries. this was a man well versed in Theology and Manichaeism and Neo-Platonism and Eschatology and lots of other terms that i can neither pronounce or define.

still, nothing that he had said [out loud] warranted whatever it was that was welling up inside of me. but what he didn't say - and what i didn't hear, but could feel - was that this is not a man who has, lost in intellectual cynicism, boldly rejected Christianity as nonsense; nor is he the Lee Strobel who dedicated years of study to disprove Christianity and justify his own atheism. some inexplicable part of me felt that he was - and is still - a man desperately seeking truth - the truth that he holds in the palm of his hand. the truth that i carry in my backpack and keep on my nightstand. this is a man who is captivated and fascinated by a gospel that his mind cannot believe, but somehow, through words unspoken, seems to wish that it could.

oh, it was more than

i could bare. i couldn't wait until class ended. i prayed. right there in my seat. eyes open. mouth closed. praying. for reason and understanding - for myself. how? why? that was it. two words.

the next thing i wrote in my lecture notes were these simplistic elements of communication: 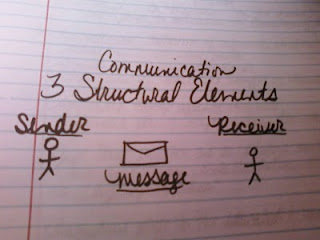 sender. message. receiver. (yawn) right, learned that in the third grade. the professor then reverted to speaking in a foreign language for a few moments as an example and then paused to ask if anyone understood the message he was speaking. of course we didn't. he continued, this time in English:

"how? .... why?"... (didn't i just say that?) "the reason is that you have to have the capacity to bridge the gap between the sender and the
receiver".

my eyes welled up with tears in the midst of that crowded college lecture room as i turned the page and drew another simplistic illustration; and i felt the Lord whisper to me His own words of John 14:6 "Jesus answered, 'I am the way, the truth and the life. No one comes to the Father except through me ... [and only I can bridge this gap]": 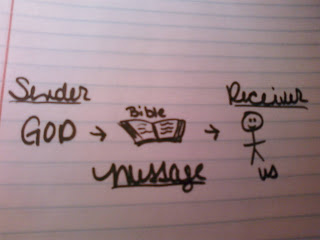 "The man without the Spirit does not accept the things that come from the Spirit of God,
for they are foolishness to him, and he cannot understand them,
because they are only discerned by the Spirit."
1 Cor 2:14
oh, how long i stood where that stick figure stands, truth in my hand and void in my soul without the capacity for understanding. i prayed another prayer. not for me, for him. in all his inestimable knowledge, relentless seeking, had he not cried out these three words, i was now crying them out on his behalf:
bridge the gap.
Email Post
Labels: life observations the narrow path