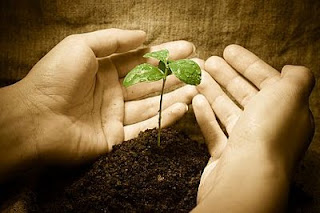 "The farmer plants the Word.
Some people are like the seed that falls
on the hardened soil of the road.
No sooner do they hear the Word than Satan snatches away
what has been planted in them.
And some are like the seed that lands in the gravel.
When they first hear the Word,
they respond with great enthusiasm.
But there is such shallow soil of character that
when the emotions wear off and some difficulty arrives,
there is nothing to show for it.

"But the seed planted in the good earth
represents those who hear the Word, embrace it, and
produce a harvest beyond their wildest dreams."
Mark 4:14-15 (MSG)
i have walked along each of these paths in my life: the one of impenetrable soil, faltering gravel, and entangling weeds - thick with thorns.
looking back, the majority of my short life was spent alternating the beaten, half-graveled paths and wandering occasionally into the overgrown wilderness. with each step, my heart was constantly conforming to that which was was beneath my feet.

it was only by His grace that He continued to cast His seeds on my path. any human would've considered them squandered. but in His unfathomable providence, He knew that one day, that tattered trail of seeds would lead me home. redemption for every seed.

when, by His grace, i embraced His truth - my future was altered. and so was my perception of the past. i had ran to Him so many times before, wounded and in utter despair. "why is this time different?", i asked. there was no immediate answer. i would whisper it nightly in prayer. i wrote it down in my prayer journal over and over. and with it, my fervor intent and prayer that i would stay: "I long to dwell in your tent forever and take refuge in the shelter of your wings." Psalm 61:4

i began to unpack the suitcase i had carried. bursting at the seams with unworthiness and yet, there buried beneath, pride. along every path i had traveled, i had held onto the prideful notion that i'd long ago settled my own salvation. my evidence of that, had you asked, was based on what i had done. and my question began to change: "did i not know you, Lord?". there was no immediate answer. but it was coming:

not in words, but in scrolling images in my mind, vivid imagery depicting the various paths i'd traveled, places i'd visited. suitcase in hand. scenery shifting with my facial expressions along the way from oblivious to selfish to sad to what looked to be ignorant bliss. and in each scene - even the ones where i was running towards Him with tears pouring down my cheeks - there was but one word resonating in my heart: LOST.

i had embraced the parable of the prodigal son in Luke 15 as my own. i was His prodigal daughter. i had read the parable over and over, almost always stopping around verse 20, which is the point where the father runs towards and embraces his runaway son. had i only kept reading, the answer may have come sooner. i already knew how the story ended, with a celebration. the older brother, in a fit of jealousy, asks why the prodigal son - who had squandered everything given to him - was worthy of a celebration. the father's reply:

"We had to celebrate and be glad, because this brother of yours was dead and is alive again; he was lost and now, is found." Luke 15:32

it was only by His grace that my feet were eventually led home; redeeming and replanting all the seeds He had scattered along the way in fertile, life-yielding ground; showering me with immeasurable grace; changing my path - and my heart - forever.

truly, beyond my wildest dreams.