directing my path - part one 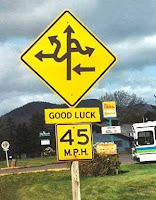 "In all your ways acknowledge Him, and He shall direct your paths."
Proverbs 3:6 (NKJV)
there is a steadfast peace that comes through surrender. sweet relief from the overwhelming knowledge that you are no longer in control of your life. which, in my case, while frightening - is also a great relief because, let's be honest, i wasn't very good at directing my own life. when we begin to relinquish control and put our faith and trust in the One who controls all, everything changes and something amazing begins to happen. He begins to change and rearrange not only the interior of your being, but the exterior of your life. God is not interested in just the overall details our lives, but the intimate details... and true surrender involves laying all of it - the good, the bad, the ugly and the utterly confusing - at His feet.
next week, our little chloe starts kindergarten and i, in keeping with a common theme in my life these days, begin again - where i began fifteen years ago - on a college campus. my relationship with higher education isn't completely unlike many other relationships in my past: tattered with inconsistency, periods of long abandonment and belated resolve. when began college in the fall of 1994, i had no idea what i wanted to do. i only knew that i loved to write and that i completely detested all things associated with math and science.
the following may, i moved to Dallas for the summer. it was a hasty decision incited by heartbreak and - in classic nadia behavior - i had packed my bags, loaded my car and ran away. at nineteen, i had already established my coping mechanism for painful situations. at summer's end, i returned home more broken than when i left and again - in typical nadia behavior - i had a season of surrender stemming from despair. in hindsight, that would be the only time that i actually prayed specifically about school and consequently, the only time i would have a sense of direction in my life. i enrolled for fall '95 and declared what would become the first of my (several) majors: English.
then, life began to happen. caving to the peer pressure of wanting my own place and all that came with it, i started working full time for an insurance company and going to school full time in the evenings, then part time, then every other quarter. six months later, i met chris and the dreams [or rather, notions] of college and/or career quickly faded, yielding way for my dreams of a big, shiny ring and our big, shiny life. i should note that God was nowhere to be found at this point in my life. not to imply He wasn't there, but that i wouldn't acknowledge His presence. i was too busy planning my life... and my wedding.
and so, in may of 2000, we stood - in a big, shiny church - in front of 200 people, reciting vows, quoting scriptures, making a covenant with God - the same God whom we had never bowed our heads to pray together as a couple to; the same God who's word i had only picked up sporadically, if at all, in recent years and the same word we had never read together. but we were "christians" by both admission and appearance and that day, we laid the foundation of our lives together on sand. sinking sand.
"Therefore everyone who hears these words of mine and puts them into practice is like a wise man who built his house on the rock. The rain came down, the streams rose, and the winds blew and beat against that house; yet it did not fall, because it had its foundation on the rock. But everyone who hears these words of mine and does not put them into practice is like a foolish man who built his house on sand." MT 7:24-26 (NIV)
my life was constructed on sinking sand. the moment i left God and set out on my own, i laid the foundation for my adulthood. i had become aware of God's presence in my life as a teenager, but in adulthood, i had continued on a path laid by my own hands, paved with stones of selfishness and disobedience.
from where i am standing now, looking back, i can still see that old path, stretching back as far as my eyes can see, rubble on either side of desolation. and in that moment of reflection, the words of Isaiah (48:18) become my reality: "If only you had paid attention to my commands, your peace would have been like a river...". yea, and my past, maybe not so much like death valley...
but that path, and that valley, by God's grace, ultimately led not to destruction, but to redemption. and this is the grace of God: His redemptive plan on the grand scale of humanity - and on the minuscule scale of our individual lives (yours and mine) - is breathtaking! He is writing His story of redemption across humanity and across our hearts simultaneously. John Piper wrote, "God names who He will have and moves the earth to bring them to Himself". i love that. "He moves the earth". for some, it may be a tremor. but, for some of us, it requires a literal earthquake to shatter the walls of disbelief. somehow, for those wounded, distrusting souls like mine, we have to lose everything before we become willing to allow Him to be our everything, redeem our past and have complete control over our future.
when we trust Him, everything changes... because He changes everything.
(...to be continued)
Email Post
Labels: the narrow path