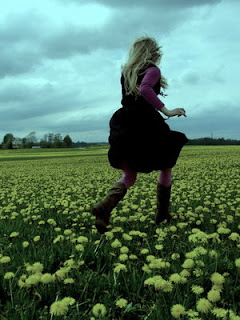 Love of my life, Look deep in my eyes,
There you will find what you need
I'm the giver of life, I'll clothe you in white,
My immaculate bride you will be...
Oh come running home to me.
~ tenth avenue north lyrics
as much as i can relate to the parable of the prodigal child, i can relate to the runaway all the more. i have lived most of my life not as a prodigal wanderer, but as a runaway: running home to my Heavenly Father in the darkest hours of my life and yet, abandoning Him by dawn. fleeing to find fulfillment - and myself - apart from Him; striving to find my identity apart from Him. striving and failing; seeking wholeness and returning empty; time and time again.
one of my favorite films [of all time] is "Legends of the Fall" in which brad pitt portrays the character of tristan: a deeply troubled soul who, despite an intense love for his family -especially his father - is a perpetual runaway. he constantly flees the love and stability of his father's house and his father's love; often abruptly. no one is ever sure of where he has gone or for how long; no one knows when or even if he will ever return. yet, the scene of his repeated homecomings remain unchanged: his father stands and offers his outstretched arms, extending them to embrace his son with such fervor it causes tears to swell in our eyes; warmth to swell in our hearts. this father's fierce love and loyalty for his son is unwavering; rock solid through the repeated abandonment; the continual inconsistency. there is a steadfast gleam in his eyes: the unspoken hope and longing that each homecoming might be the last; that "this time", his child has come home to stay...
tristan's story is my story. the filmography depicting his heart is the autobiography of mine: everyone who knew him had long forsaken the hope of any consistency in his life, deeming him to be irretrievably lost; irreparably broken. he was the runaway to everyone... everyone except his father.
towards the end of the film, tristan returns... again. for good. inexplicably. his previous returnings were marked by a prevailing sense of despair, as if returning to his father's house and his father's arms were an act of temporal refuge. but this time, oh, this time something - everything - within him had changed. the peace within him is palpable. his father's love, unshakable. he has learned what i have learned: his father's house was where he had belonged all along; his father's love was the very thing he had sought and yet, at the same time, rejected. this last time was different because he was different: the wounds of his past were healed. a cleansing flood had occurred washing away his pain and with it, his desire to run; the need to flee.
i, too, rounded the corner home to my Heavenly Father this last time with a spirit unlike so many times before: my steps were not filled with despair, but with hope; not with begrudging obedience, but with longing for Him. something was different because i - by His grace - had been made different. though i was - and am - and will always be - unworthy of this love and this grace, He clothed me in His righteousness and deemed me worthy (phil 3:9). He did not call me a prodigal, nor did He call me a runaway.
He called me His own and He called me by name: Beloved.
we cannot run away from that which is within us, but our Heavenly Father can heal that which is within us and redeem our past for His glory. a father's love had healed tristan's wounded heart. our Heavenly Father's love healed mine...
He desires to heal yours, too.
Email Post
Labels: the narrow path