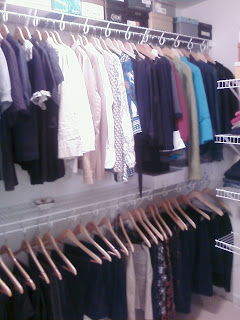 :: my closet::
i heard a psychologist once say that the interior of a person's home, specifically the inner places like cabinets and closets and attics - often a reflection of the interior of the person.
if that is true, i am [as steffi would say] totally "ska-rood".
i am the messiest person i know. which is odd, considering that my closet - when clean - looks like this. and i mean has to look like this. wooden hangers. facing left. organized by article or sleeve length, then by color. denim folded and stacked. like a store. albeit, a very tiny store, but still. i stop short of using a folding board on tee shirts, but only because i did a brief stint at the gap in my late teens and consequently, have mad folding skills.
housekeeping would be a lot easier for me and probably occur much more frequently if i didn't have such ridiculous standards that were impossible to maintain. my closet looks like this about once every month or so... and the rest of the time, you can't see the floor...
and so i often wonder what the psychologist would have to say about me... perhaps she would diagnose the obvious, which is that i have a little problem with a thing called moderation. [or she might throw out the broad generalization - as steffi also does - that i'm as "crazy as a sprayed roach"]. the truth is that the thought of doing anything in small increments is excruciating to me. i'm an 'all or nothing' kind of girl. and frankly, that hasn't worked out so well for me - which could segue into a multitude of facets... too many from which i am just too tired from all my obsessive cleaning and organize to even choose.
speaking of moderation, i never thought i'd enjoy running the way i do these days. i have no marathon aspirations or desires, but i really enjoy running the 5k and 8k runs. i never planned to start running, it just sort of happened. i'd run a little here and there when walking on the treadmill or track. i'd walk a lap, run a lap... walk a lap, run two laps... and literally, before i knew it, i was running. solid. and even more unexpectedly, i was enjoying it (granted, initially, i was probably thrilled that i no longer felt like i was going to drop dead).
running - in and of itself - has taught me some serious life lessons on moderation (obviously still a work in progress), but running literally transformed my thinking, forcing me to set small goals, pace myself and ultimately, endure. it is astonishing at how fast the human body and the human heart can build endurance. you find yourself anxious to see if you can push yourself a quarter mile farther next run or a fraction of a minute faster in pace.
running is - simply put - the best thing that could have happened to me at the very season it occurred in my life. i had tried running in the past and deplored it. it was hard. it was boring. it was really hard. and utterly un-enjoyable. it is so fitting that i became this recreational runner without even a sliver of intent... and endured through the most difficult season of my life because of it.
i am a work in progress. which reminds me of this excerpt from a previous blog:
------------------
"There’s a process of preparation God takes us through in order to make us what we need to be. But preparation takes time. God must deal with our inconsistencies, personality defects, areas of distrust, unresolved childhood issues, scars, flaws, etc. We should all wear a sign that says: “Work in progress."
-------------------
here's to enduring through the process... and having funny friends that make you laugh through it, too. :)
Email Post
Labels: health/fitness life observations stumbling towards idiocy