he's just not that into you... 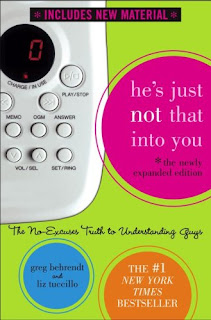 where was this book [and movie, for that matter] when i really needed it? two decades ago when i was in my preteen beginnings of what would become a lovesick decade of pining over boys who were ... just not that into me. oh, in hindsight, it's all so clear now.
i love greg behrendt's blatant honesty. i love the fact that he treads fearlessly where girls and women often refuse to go.
i didn't have a whole lot of dating experience pre-marriage, however, i feel certain i would've had a whole lot more experience [and a whole lot less heart-wrenching poetry] had i accepted the simple truth that rejection was going to be an inevitable part of the whole boy-girl thing.
is this some sort of innate self-defense mechanism? our innability to accept the possibility that our affections may not be returned for no particular reason? granted, in adolescence, we are already ahead of the game emotionally - and intellectually - and so it begins, the ceaseless theorizing and hypothesizing. we dish out rejection frequently, but it seems we are completely inept at accepting it ourselves. [and i'm speaking solely for myself here].
i wasted precious years of my life post-high school pining for a man who only half-heartedly returned my affections, at best. time that could've perhaps been some of the best times of my life away at college, i spent on the phone with my [older and wiser] best friend, pouring over every detail of a recent conversation. delving into all of the [obvious] issues that must've been holding him back. i opted against going off to college because i knew, i just knew, that once he overcame whatever it was that was holding him back from a full-on commitment, he would totally marry me. excuse after excuse, year after year... for nearly four of them. he was into me. just enough to hold onto me. but to marry me? well, turns out, he just wasn't that into me.
if only i had known it was as simple as that.
in the aftermath of that romantic fiasco, i found myself entering adulthood, utterly bewildered. damaged goods, already, at the ripe old age of twenty. i had moved on from trying to figure out what was wrong with him to trying to figure out what was wrong with me. and here's where we go all wrong... when we begin picking ourselves apart to find evidentiary support for rejection, as if justification will in and of itself give way to vindication. i had already concluded that perhaps, i wasn't mature enough or smart enough or funny enough or thin enough, [God knows, i would never be thin enough]. i was probably still compiling my list of personal faults as he was planning his wedding to some girl that he was that into.
my mother had "the talk" with me when i was thirteen. you know the one. i can still feel the heat rising up into my face as she intertwined words like "virtue" and "honesty" in with others like "protection" and "birth control". my mom has always been a straight shooter, blatant facts and honesty, and "the talk" was no different. i was horrified. i had absolutely no inclination of doing whatever it was she was talking about, primarily because i had not even kissed a boy yet. and it wasn't for lack of them trying... i already had a "list" of two or three boys i would allow to be my first kiss and i wasn't compromising with any boy who didn't make the cut.
thinking back to that afternoon, sitting in the passenger seat of my mom's car - i'm thinking it was her sky blue topaz that she absolutely detested or maybe the cream colored buick century with seats that looked like red velvet cake - anyway, sitting that car... before my first kiss... before my first heartbreak, i realize, i'd have been much better prepared for what was to come if she had simply said:
"look, sometimes you're going to like a boy, really like a boy [the way you like the ones on your mental list of 'acceptable first kiss' list (only i hadn't told her about that)], and he might not like you back. sometimes, he might like you back, but not enough to treat you right. if a boy wants to be with you, he's going to make it happen. just know, if he doesn't - it has nothing to do with who he is and more importantly, it has nothing to do with who you are. if and when this happens, accept the simple truth: he's just not that into you. and you know what? that's okay."
Email Post
Labels: divorce growing pains life love and marriage observations unpacking