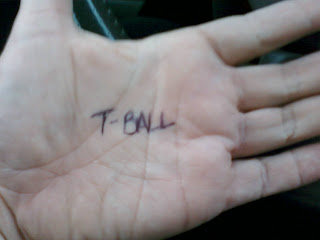 this is what my life has come down to. writing on my hands in my futile attempt at forcing my brain to remember a task. so much for my one [and only] new year's intention at living a life more organized and less over-committed.
and so, i have to blog. i just have to. i shaved a solid ten minutes off my time spend in "hair and make-up" this morning and rushed down the stairs to the laptop. it isn't that i haven't had the desire to blog. i have. and the words, which sometimes escape me have become a proverbial melting pot in my head, now boiling over. rapidly. words and thoughts coming so fast that i have to put them somewhere. it isn't enough to just ramble them out loud, although i do a lot of that sometimes, too. this is in large part because i live alone - most of the time with preschoolers - and the rest of the time alone. in solitude. which is something completely new - and completely weird - for me. and since i almost exclusively communicate with my friends via text, facebook or on occasion, in person - i've grown accustomed to rambling out loud. chloe overhears me on occasion and says, "mommy, are you talking to yourself again?". she has long since stopped asking who i was talking to. she knows.
maybe i should get a cat. then i can be the crazy single mother who talks to her cat. and then blog about it. until said-cat died of malnutrition because i would - inevitably - forget to feed it and then would add said-cat's death to the ongoing list of guilt-ridden angsts that keep me awake at night. i don't like cats anyway. but on the off chance i do someday find myself with a cat, i'm going to name it Said-Cat. or maybe Sad-Cat. same thing.
blogging requires one thing i haven't had much of lately: time spent sitting, staring blankly at the blogger screen. with current market conditions [did i just say that?], we are furiously working to salvage what money our biggest investment clients have left by transferring into fixed annuities. snore. i know. long story short, i'm actually working at work. a lot. and at home, my poor, poor laptop is on its last proverbial legs. it's missing two keys and i have to leave it plugged up and open out of fear that it may not boot up again if i shut it down or the battery dies. this has already happened. it's dying a slow and miserable death. another true testament of my utter and complete inability to handle things with care. . . just like my car, my smaller digital camera, my iPod, my nintendo DS, even my new pink samsung blackjack, which i swore would never meet the tile floor or asphalt... all battered and bruised with multiple visible imperfections. most of which were completely preventable. again, the fact that i am responsible for the upbringing of not just one (but two) human beings is utterly ridiculous.
so this weekend consisted of: an 8k run, followed by rushing around in sweaty clothes looking like a hot mess to pick up a last minute gift for one of the three preschool birthday parties we attended; stopping by heather's for a candle party; gymboree, sports clips for Parker's haircut, still in my running clothes. i had just enough time to shower and change before chuck e cheese ... and this is all just saturday. lucky for me, when i tried to wake Parker up from his nap to go to second party, he refused. "i too busy" he said and promptly rolled over and went back to sleep. sunday was churchtime, lunchtime, naptime and build-a-bear party.
somewhere in between all of that, we had planned to register for t-ball, hence the note i inscripted on my hand during church service. we had two hours between church and departure time for the build-a-bear party. hunger and irritability were running rampant in the car after church ... and the kids' weren't coping so well, either. chris and i are discussing the registration fees, how we'll manage the schedule around chloe's already ongoing ballet class and how we could possibly eat, sleep and drive to registration and back to the galleria in two hours. channeling my inner susan powter, i just said, "we have GOT to stop this insanity." and just like that, parker's T-ball career is on hold until he turns 4. "well, we can just play soccer instead this summer," chloe says... and i'm not sure who she's trying to console: me or parker.
and now, - today - it's 10:45.m. now. having been up since before five, it's the middle of the day to me. i've already been to spin, mopped the kitchen floor [which totally wouldn't have happened had remnants of hand dishwashing detergent not found their way into the dishwasher - and consequently, distributed a flowing stream of very soapy suds out onto the floor - and ironically, my first thought was , 'oh, how convenient'], folded a load of laundry, showered, dolled up and am now at work, where i need to be working... and back to that whole new year's intention. i'm glad i decided to call it an intention rather than a resolution. otherwise, i'd really be feeling like a total failure right now. :p
lots more to come soon... now that i've spit out the inital blog, i can start organizing and compartmentalizing the rest of these words: a post on frugality. another on racing (i.e. as in running- and not nascar)... oh, and why i can't wait to see this movie.
Email Post
Labels: growing pains life mommyhood randomness the blogger in me