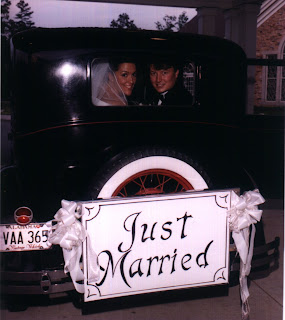 May 13, 2000
"one often meets his destiny on the road he takes to avoid it".
master oogway (kung fu panda)
those smiling faces peeking out of the back of that 1939 Ford Model A had no inclination that the road would lead to where we are today. wise master oogway is actually quoting a french proverb and while i don't know if that is considered a universal proverbial truth; and while i don't believe this was our "destiny" per se, it is certainly truth, or rather - reality - in our lives. its also a fitting caption to the photo. two kids in their early twenties beginning a life together desperate to avoid taking the same road as our own parents.
i [finally] disclosed my relationship/marital status on my facebook account today. there is some humor to be gleaned in the fact that this was - in and of itself - a very serious step towards some new, ambiguous level of personal growth and self-acceptance. i received an onslaught of comments and personal messages in my inbox. a paradoxical mix of congatulations and condolences and prayers and concerns and questions.
this is my first blog about divorce. which is weird, considering that despite my inability to utter it, it has been a definitive reality of my life for a very long time now. admittedly, i was secretly relieved at the options i had to choose from on facebook; relieved that i could simply click on 'single', rather than what i really am, which is divorced. there. i've said it. it's out there. like shining a light on the elephant in the room. divorced isn't an option on facebook. maybe their people caught on to how burdensome it is to carry that label and facebook is supposed to be fun... and enjoyable... and easy. and divorce is so... um, none of those things.
divorce. it's such an ugly word. there are no pleasing, light-hearted sounding synonyms. i have spent so much time fruitlessly searching the thesaurus to find something that sounds... i don't know, prettier. less tragic. splitsville is actually listed as a synonym, which is funny to me. this entire blog could have just as easily been titled postcards from splitsville, but i felt that was too one-dimensional. i didn't want to be defined by my marital status, or rather, lack thereof and who am i kidding... when i began blogging again, i couldn't bring myself to even say the word. not even type it. when my search for a pleasing synonym or acronym left me empty handed, i resorted to foreign languages. surely it would sound prettier in french. le divorce. no. not much different. spanish? divorcio. perfecto. like, bingo. deee.vorc.eee.oh. it's almost fun to say. almost. but there is nothing funny about divorce. or so my mother says, often. she says this to me whenever i try to find humor in the reality of my life. she tells me this as if she really believes [i mean, really, really believes] that i find the end of my marriage - and life as i knew it - to be hilarious. the truth is, her really believing that is the only thing that is hilarious. at some point, i will inevitably blog about the humor i find in post-divorce life. please let this be my disclaimer that i really do not find divorce to be hilarious.
what can i tell you about el divorcio? i can tell you that it is not as bad as it sounds and yet, at the same time, sometimes, every bit as bad as it sounds. of course, its a completely subjective experience, but no matter where one falls on the spectrum of marital failure, it is - inevitably - the biggest, juiciest slice of humble pie that one could ever be served. it cannot be consumed in one sitting, only piece by piece over time. it is not delicious, which is ironic, because at times it seems everyone wants a piece of it in their mouth and eagerly shares it with others.
more than anything else, divorce is like death, both figuratively and literally. divorce is a death. all the counselors and books and classes tell you so. complete witht the five stages of grieving. perhaps the only difference is when an individual literally dies we conjure up all sorts of phrases that are much more easily swallowed by others. you know, like "passed away" or "dearly departed" or my personal favorite, "gone home to be with Jesus". when asked about a loved one who has "gone home", we have all sorts of stoic ways to respond without having to come out and repeat the often harsh and tragic truth to them or to ourselves, which is simply: "they're dead". no. we avoid using the d word at all costs when there is a death. the english lanaguage doesn't offer up and comforting alternatives for the other d word.
perhaps there are no more easily swallowed words or descriptions, because it cannot be candy coated. the consequences of divorce overshadow circumstances. it matters not how it ended or why, the fallout is inescapable. divorce is tragically painful, publicly humiliating, deeply wounding and a plethora of other less than desirable emotions and experiences. as christians, we often compartmentalize our deepest personal sins and failures - as well as those of others, selecting what we believe falls within the realm of God's grace and what should not. or could not. we often embrace legalism, because if we can somehow earn God's favor based on our performance, we are way ahead of [and by ahead of, i mean better than] so many people. [and by we, i mean me] because pre-divorce, that was me, walking the fine line between legalism and hypocrisy. some wrong beliefs and right behavior. some right beliefs and wrong behavior. and when confronted with the reality of divorce (read: other peoples' divorces) i would scoff in both pity and judgmental criticism.

scoffing is so very, very difficult when you have a mouthful of humble pie.
divorce is so deeply personal. i've needed to write about it [because that is just what i do] but i've struggled with finding the boundaries, both in and out of the blogosphere. initially, i divulged information freely, desperately trying to maintain my ability to manipulate perceptions or gain and maintain acceptance. i finally realized that either was a pointless effort and that sharing too much was ultimately dishonoring to what was. to who we were. to who we are. it is a daily struggle to quelch the desire to explain and i know it is an equal struggle for others not to ask. inquiring minds want to know. this is why we read tabloids. our human nature desires details. we want answers and yet, i have none to give. there was no single catalyst. no final proverbial straw. it was a slow fade. exactly like the song by casting crowns.... and that, my sweets, is all that i will ever say about that.
divorce is like every other deep personal failure and tragedy that shakes us to our core in adulthood, especially the ones that seemingly depart from God's intent and will. the only thing that comes close to it, in my adult life, was the tragic death of my step-dad that i recently blogged about. i don't believe that God wills tragedy. i believe tragedies - including divorce - occur because we live in a fallen world. and because we are fallen humans. but, having been through it and come out on the other side of it, i also believe - no, i know - that His grace and goodness and faithfulness are big enough, even for this. and i rest on the promise of Romans 8:28 - that He can use ALL THINGS (read: yes, even this) for His good and to glorify His name.
more to come from splitsville later.
Email Post
Labels: christian walk divorce life observations