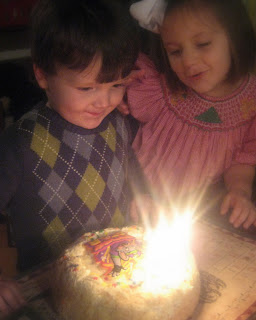 following a birthday party extravaganza at chuck e. cheese this morning and a giant spiderman cake, we took the smaller chuck e. cheese cake to nana's to have with family this evening. the look on his sweet little face says it all. it was a happy day indeed.
parker's actual birthday is still a few days away (the 19th), but we naturally try to separate the celebration from Christmas as much as we can. everyone tells you that time seemingly passes more quickly with the second child and that is so true. it's difficult to believe that three years and eighty pounds ago, i was preparing to give birth to this *surprise* child.
i never wanted boys. or so i thought. i had it predetermined in my mind that i would have girls. two or three of them. and i'd refer to them as such. my girls. the girls. growing up, i always wanted a little girl. and then i had chloe. who has always embodied everything i ever dreamed my baby girl to be... right down to the dimples and giggles.
when we found out we were expecting and that the due date would be so close to christmas, we decided not to find out the gender. this was shocking to everyone who knew me since patience and delayed gratification are not innate traits of my character. i think i secretly feared that it was a boy. i secretly feared being somehow disappointed if i found out prior to his birth. but still, i knew. i knew in my heart this child was a boy. although admittedly, the night before we went to the hospital, i packed some girl clothes just in case.
when they announced it was a boy, i wasn't surprised ... at all. in fact, the only surprise was how unsurprised i was... and then i saw him and that became the surprise. complete opposite of what chloe had looked like as a newborn, there was this tiny, pink baby with rosy cheeks and just a tiny bit of light blondish hair. lots of mothers talk about how love at first sight doesn't always occur with newborns, but it was almost immediate with parker.
three years later, i often think to myself that if i ever had more children, i would secretly wish for more boys. i had always heard that there was something special about little boys and their mamas and it's so true, in an undefinable sense. parker is all boy in his growing affinity for all things related to dinosaurs and superheros, but he is also one of the sweetest, kindest children. instead of saying "i love you", he always says, "i wuv you, too"... even if he is saying it first. he loves his sister, so much so that he refers to her as "my chwoe".. and his "chwoe" is the first person he asks for in the morning. he is growing like a weed and constantly reminds us that he is a "big boy now" because he is "fwee" and no longer two.
birthdays are the moments you want to live in. but there is tension if you linger too long. you look at a photograph that you took a few hours ago and you can already envision yourself ten years from now looking at the same photograph weeping over how young they were. or how old you are now. or both. lingering too long brings about that painful awareness that i've blogged about recently of how fleeting our time is. how fast our children are growing. how fast we are aging. and perhaps, even more painful, how powerless we are to stop any of it. or even slow it. that's the harsh reality of adulthood.
oh, to be "fwee" and consequently, free from the knowledge of how fast life is moving. 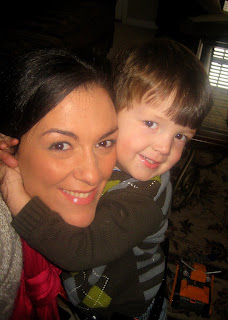