childhood revisited. no... make that relived. 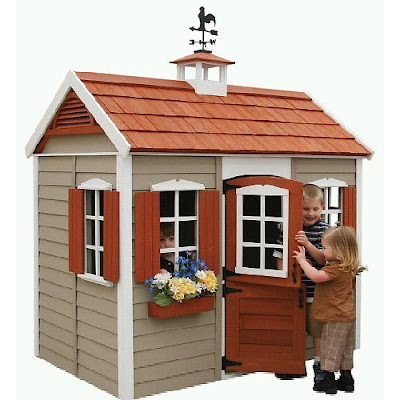 i'm not sure how exactly santa is going to get this one off his sleigh, but i suppose that's his problem. i've been waiting a long time for the day my children would get their very own playhouse and admittedly, i am probably more excited about it than they will ever be. i've blogged before about the playhouse of my childhood. it was, like most other things from my childhood, absolutely enchanting in my distorted memories and a pitiful, run-down, spooky shed-like structure in the reality of adulthood.
distorted memories. the phrase immediately evokes the mental image of my pony. i had a pony. a real live pony. every little girl's dream. this was a pony that - in my memories - had a beautiful, smooth, thick coat of chocolate brown fur. it was like a real, live version of 'my little pony' toys. and then, in adulthood, i found a picture of the poor, pitiful creature that somewhat resembled a pony. in the photo, i'd already outgrown the pony and my sister was perched atop its saddleless back while it ate loaf bread scattered on the ground. its coat was more multicolored and graying with a scraggly, unkempt mane. this was clearly not a pony it its prime. no. this was definitely a geriatric pony. maybe thats why my great-grandparents got a great deal on it. i never knew.
when we bought our first house, i immediately had plans of rescuing my old playhouse. those are the plans that would later evolve into rescuing my childhood house, but i've already blogged about that and am consequently, still working on letting it go. i had visions of it repainted, reshingled, with a new front door, new windows, a nice little window box. we drove out to leeds and found it in a neighboring, abandoned yard. the property was for sale and the realtor said i was free to take it. we later found out the foundation was so rotted that it was impossible to move without it falling apart. in hindsight, this was the point when i let go of the playhouse and set my sights on the actual house.
now that both are no longer options of restoration, i've moved on to recreating similar things in my own children's lives. minus the geriatric pony. i just don't have the yard space.

i hope they will spend as many hours and make as many memories in their playhouse as i did in mine. and i can guarantee you one thing: they will not come back in three decades to find it rotting in a neighboring yard. no. mama's gonna keep up the resoration on this one, remembering and reliving my own childhood along the way. :)
Email Post
Labels: growing pains life mommyhood