i can actually feel a blog coming on. its not completely unlike the the preemptive sensations of a sneeze. in fact, sometimes it is exactly the same order of sensations: a sudden urgency and then the pause, perhaps a moment lost in thought, and then repeated urgency until at last, you sneeze. hard. and just like that, relief washes over you. you certainly don't go on about your day wondering if you'll ever sneeze again, but there are some days i find myself lost in mind numbing wordlessness and i wonder, "will i ever blog again?".
ernest hemingway famously said, "There is nothing to writing. All you do is sit down and a typewriter and bleed." all writers at heart (good or bad; great or terrible; famous or unknown) can agree. writing is not a choice. but a necessity. you know, in much the same way sneezing is a necessity when the urgency of it arises. choosing not to sneeze isn't an option. quoting an earlier blog, i said: "it seems that whatever i bury deep within eventually overflows, rarely out of my mouth, but much more frequently down the length of my right arm into my hand and by a mysterious osmosis, into the pen and out onto the paper." although, these days pen and paper are about as archaic to us as a typewriter to hemingway - but it certainly sounds more poetic than "keyboard" or "blog".
all of that said as simply a preface to the heart of this particular blog about... my church. after two years, i finally made the decision to become an "official" member. having grown up in a tiny rural church, i never thought that this particular church, given its massive size, would ever feel like home. two years ago, as the cardboard shards of my life were falling down all around me, i sought refuge in anonymity of a large crowd. i fled to this place where i didn't have to get dolled up in my sunday best or put on my sunday face. i could show up in jeans and my favorite brown flip flops. i could be nameless. faceless. hidden. safe. i didn't have the strength to feign normalcy anymore. i didn't have the strength to feign anything other than stoic anonymity.
the massive sanctuary was a refuge from the storm and i was like jonah, at first, futilely hiding in the hull of a ship. concealed from human recognition. but not God's. so much like jonah, only when the storm became unbearable, did i cry out to say, "Here I am, God!", (as if I were really cluing Him in). from that point on, the sanctuary was no longer like the belly of ship, but the belly of the whale. dark, yet safe. and like jonah, i had figured out that this whole "running and hiding from God" thing was, ultimately, not going to pan out.
i read the story of jonah to my children often. i've never thought about it until now, but i've always imagined that these events took place over, oh, i don't know ... over the course of a few consecutive days: boarding the boat on tuesday, tossed out and swallowed by a whale on wednesday, spat out onto the shore on thursday... you know, all in time to hit the sand running and arrive in Ninevah on Sunday, maybe even in time for early service.
these are the kind of unrealistic expectations that deter so many of us (read: me) on our christian walk. we grow up hearing about lives changed in an instant (and that is certainly the case for some); but for the rest of us, allowing the Lord to radically change us doesn't come so easily. the reality is, jonah was on a boat heading to opposite side of the meditteranean sea. a three thousand mile journey - even in the belly of a whale - had to have taken a while. i wonder if jonah spent countless hours just as i spent decades making "this time" promises that i couldn't keep to God. "if you can just help me - this time, i promise, i'll do better"; "this time is really it"; "this time, i'm really going to get it all together". every single time relying on myself to do better. getting up and trying harder instead of falling down and surrendering all. saying "here i am" instead of "here am i". amazing the difference reorganizing a three word statement can bring. i like to think jonah, finally, in kicking and screaming reluctance bellowed out in the belly, "Here am I!"... and just like that, dry land.
(i love this illustration that capitalizes "THEN" jonah prayed, alluding to the theory that maybe he did a lot of proverbial nothing prior to that.) 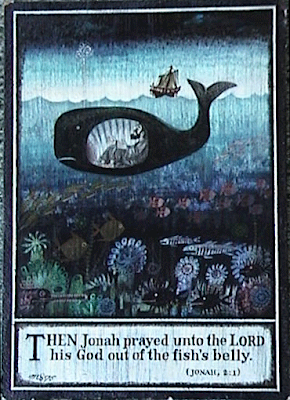 and so, here am i. over two years after boarding that large, ambiguous ship that eventually became the belly of whale: spat out onto solid ground in an unfamilliar land. and i'm still so much like jonah standing on the shore: shaken. frightened. filthy. but permanently changed - never to doubt (or run) again.
the first place i walked on my own to feet was into a small group. there was urgency in my steps. i didn't bother cleaning up before i showed up. (in fact, i was likely wearing the same brown flip flops i began the journey with.) i didn't know these women, but God did. more importantly, he knew i needed them. peeling back the layers of whale goo and anomynity, i opened myself up to a group of women. without hesitation. without reservation.
it is the first time in my sixteen [tattered - sometimes sporadic] years of church life that i have been amongst such, for lack of a better word, realness. i think this is exactly the kind of authenticity that paul spoke of in galatians when he gave the instructions to "bear one another's burdens". how can we possibly bear burdens that are concealed or unspoken?experiencing and sharing life: the good, the bad, the hideous - and everything in between. this is life sharing - and faith sharing - at its very best.
every path is so very different; paved with so many different milestones and each step so varied in pace. for so long, i felt i had to walk alone. or crawl. or sit in the belly of the whale in darkness.... alone. i am so grateful the Lord has placed others to walk alongside me and placed me in a faith family where the refuge is no longer in the anomynity of a crowd, but in the peace of His presence. :)
Email Post
Labels: christian walk life the blogger in me