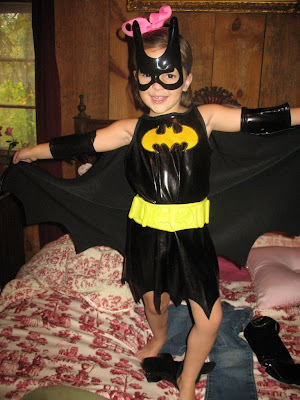 earlier today, we're standing in the midst of the costumes staring at the price tag on this little get-up. i'm trying hard to mentally justify the cost of batgirl. fortunately for chloe, the nanna was with us. "well, i'll get it for her, but it is a lot for just one night" she says. and then i realize, it's not one night. it's boo at the zoo, trunk or treat, ballet class costume party, and halloween. not to mention hours of random play at home with her brother, spiderman. suddenly, the price seems so... reasonable. even when nothing else about this particular holiday does.
when i was a kid, halloween was one day. one single day. one single event. one night of trick or treating. and for this one single night, i had one single costume. this is no longer the case. halloween has somehow evolved into its own season, culminating with a weeklong series of events. a halloweenopalooza.
chloe - in perfect chloe-like fashion - decided on her costume months ago. and chloe - again in perfect chloe-like fashion - changed her mind. more than once. most of the time, she was debating on which disney pricness she wanted to be and narrowed it down to ariel, cinderella and snow white - which was of no grave concern to me since she has a closet full of disney dress up dresses to choose from and even a tinkerbell outfit, for good measure. i wouldn't even have to buy a costume.
enter batgirl. apparently after some "consulting" with her bff neal at school, she declared to me last week that she "had to be batgirl" for halloween. "how do you even know who batgirl is?", i asked. "well, i don't. but neal is going to be batman so i have to be batgirl." "well, batman can be friends with snow white too, you know," i try to convince her. "no, mommy. batman is only best friends with batgirl!".
more photos of my superhero children to come soon. :)
Email Post
Labels: mommyhood