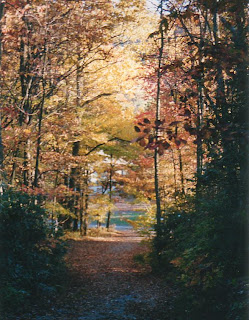 "In the Trinity Term of 1929 I gave in, and admitted that God was God, and knelt and prayed: perhaps, that night, the most dejected and reluctant convert in all England. I did not then see what is now the most shining and obvious thing; the Divine humility which will accept a convert even on such terms. The Prodigal Son at least walked home on his own feet. But who can duly adore that Love which will open the high gates to a prodigal who is brought in kicking, struggling, resentful, and darting his eyes in every direction for a chance of escape?”~ C.S. Lewis

my conversion to Christianity (read: what we here in the bible belt more often refer to as 'gettin saved') was nothing like that of C.S. Lewis' description. there was no reluctance in my step when i bolted out of the pew and down the aisle of a tiny little church in pell city, alabama on a saturday night in 1992. kneeling and weeping, i didn't know exactly what was happening, but i did know – without a doubt - that it was the Lord calling. and i accepted. oh, to be that fifteen year old girl again - desperately rushing without hesitation to weep at His feet. no, there was no kicking and struggling in that moment. that would come later. and it would come often - although never quite as often as it has throughout this year.

despite my perpetual prodigal and rebellious thoughts, actions and deeds – i always, always end up where i began: weeping. face down. desperate. at His feet. as a result of having found myself this place so many times, He has taught me more throughout this year of my life than all the previous years combined. and the common thread that intertwines itself through every truth revealed is simply that He never lets go. even when we give him every reason to. even when - by all appearances - it seems we wish He would. He still calls and draws us near to Him – and that is when the words of C.S. Lewis ring clearly in my head. and in my heart. my dejection and reluctance is palpable. i have – at times – been the prodigal daughter walking home on her own two feet. but more often than not, i am drawn in kicking and struggling. there is a long, tattered path between accepting Christ at age fifteen and trusting Him at age thirty-two. and at last, i give in. and even though He knew it would – i still think to myself - it shouldn’t have taken seventeen years. so much time spent fruitlessly searching for who i was, where i belonged. all the while He was calling, "you are mine. come home." this is the epitome of His enduring faithfulness. His grace is sufficient. even when you take the long way.

ironically, or rather - providentially – chloe’s memory verse for this week is Romans 8:39. at four, they learn the abridged version of verses and she has developed her own unique memorization technique: turning them into songs. songs with no particular melody, i might add. sort of a mix between singing and yelling. we went to visit my sister tonight and in the car chloe belted out “nooootthiiing can sepaaaraaate us from God’s love… roooomaaaans eeeeight thirtyyyyy niiiiiiiine” all the way there and back. like a chorus on loop. over and over. oh, how it is my prayer for that verse to ring as loudly in her heart as it [is still] in my ears.

“neither height nor depth, nor anything else in all creation, will be able to separate us from the love of God that is in Christ Jesus our Lord.” Romans 8:39 (NIV)
Email Post
Labels: christian walk life mommyhood religiosity