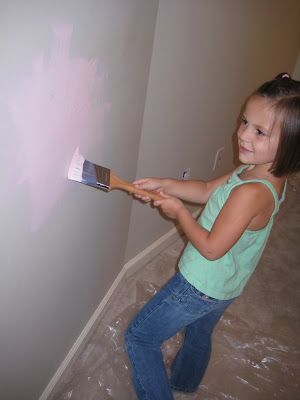 i have now posted a few little photographic jewels detailing the fruits of my labor day weekend. i seriously put the labor in labor day, deciding it was high time to repaint the dining room, the stairwell, chloe's room, parker's room... need i go on?

anyone who knows me can tell you that my time management skills leave much to be desired. perfectionism and procrastination don't exactly go hand and hand, but add to that seriously inept skills of predetermining the amount of resources (both timewise and financial) that these little projects of mine consume and you've got a recipe for disaster. okay, disaster may be an exaggeration, but still - a fitting description of the condition i left my house in this morning.

every weekend is a three day weekend for me. fun fridays with the kids and half of sunday spent journeying to mecca, i rarely have enough time to do wash and blow dry my hair straight again before monday comes... why i thought an extra day would be the equivalent of an extra week, i know not. but enough about that. unimpressive time mangagement skills aside - i'm relatively impressed with my bargain decorating skills and i'd much rather blog about that.

it all started when i decided to redecorate parker's room. my little rambunctious, dinosaur loving,

almost three year old boy was still sleeping in his crib... and a room full of pbk chamois lambies. granted, he is seemingly oblivious to his decor - a point which chris has reminded me often in the futile attempt at thwarting my redecorating plans and consequently, any physical assistance that might be required on his part. but, my mind was made up and perhaps, unfortunately for Parker, it was made up long before his love of prehistoric creatures became evident. 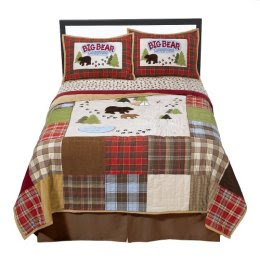 i had already chosen this adorable woolrich kids collection from Target and in an uncharacteristically frugal move, began collecting pieces of it last year. i have to tell you - as an avid fan of all things pottery barn - this woolrich collection is on par with the pbk quality. it looks and feels great - and the adorable little paw print sheets are 250 thread count. this collection has adorable accessories including: throw pillow, stuffed bear pillow, bear coin bank, red lantern and matching lamp. i bought all of the pieces that were available, but had to track down the bear clock on ebay. at target i also purchased this cute little bookshelf in natural wood and these cute chalkboard bins in red for storage - that fit into the shelves. [again - so impressed with the quality of these target items! the shelves obviously hold up to 40 pounds easily!] parker's room is really coming together. 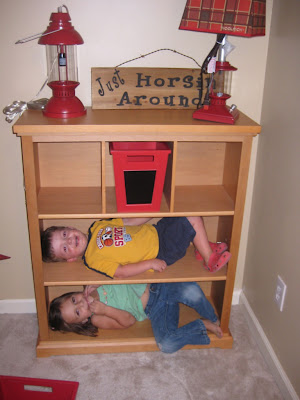 it would be coming together a lot faster - i might add - if had decided to work on one project at a time instead of adopting the "while i'm at it..." attitude. in my defense, chloe's room really did need repainting and it does look adorable in it's new shade of olympic brand 'pleasing pink' from lowe's - which lived up to its name, turning the perfect shade of pink after the second coat dried - not too harsh, not too pepto-ey. just right. 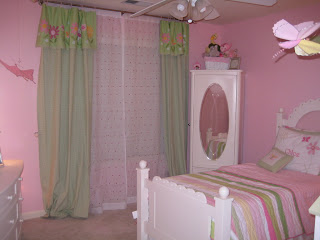 now i can focus on finishing up Parker's room over the next week or two. his walls are prepped for painting. and i'm prepped for another lesson in patience - trying to learn that i can't do it all in one day. even one very laborious labor day.
Email Post
Labels: decorating mommyhood shopping stumbling towards idiocy