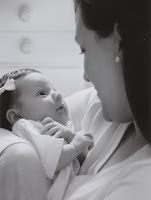 when chloe was just a few days old, i distinctly remember holding and rocking her in the glider in the corner of her room. sobbing. not the stereotypical 'baby blues' tears and not the tears of sheer elation, which also fell from time to time during those first few weeks, but at this particular moment it was an outpouring of anxiety that came with the realization that my heart was no longer contained inside of my body.
i was raised by a survivor. i was raised by my grandmother who's first husband (my grandfather) died a heroic death in vietnam. she was my age (32) when she became a widow and consequently, single mother of three girls, ages 5, 11 & 13. i remember standing beside his grave in oklahoma with her when i was a child. i wasn't old enough to read, but i could recognize that her name was preemptively etched into the heart-shaped carving next to his name. years later, i would stand with her at the graveside service for her mother (my granny), who had suffered a prolonged and degrading battle with alzheimer's. ten years later, we stood together at the funeral for her husband (my stepdad) who died suddenly in a tragic automobile accident twelve days before christmas. i greived tremendously, but i was learning what she already knew about life: it goes on. even against our will, sometimes.
before i reached adulthood, i had already learned from my mother's life experience and example that i could survive seemingly insurmountable losses: the loss of a spouse. the loss of a parent. but the loss of a child was, and still is ... unspeakable. "i don't know how they survive", my mother would always say, followed closely by, "i'd rather die myself". i never understood what she meant exactly. loss is loss. survival is survival. or so i'd thought. until that moment, holding my precious newborn baby girl in the corner of her nursery. i knew that life would never be the same. i knew that i would never be the same. i would never breathe quite as easily on this side of eternity. parents, spouses, closest friends, we love them with all of our hearts, but our children, they are our hearts.
two years ago, when chris and i separated, i began having panic attacks and a recurring nightmare that would startle me awake, immediately rendering an attack that would leave me shaken and the nightmare itself would haunt me for days. the nightmare was, invariably, the image of either of my children falling into deep, murky water and immediately vanishing from my sight. i always awoke immediately at this point, but during the course of the panic attacks, in which i couldn't get my thoughts or breathing under control, i would always envision myself diving in, frantically searching, reaching and grasping through depths and darkness. total darkness.
the panic attacks have subsided, as have the nightmares. i am still shaken to the core every time i hear of a child's drowning.
this afternoon, my nightmare became a tragic reality for a mother on lay lake. "his family rushed to the pier and into the water to attempt to save him, but they could not find him." unable to rescue her four year old child, five hours elapsed before he was recovered by a dive team.

i am without sleep tonight. and i am without words, except for the one: unspeakable.
>>>please pray for the shaver family<<
Email Post
Labels: life mommyhood