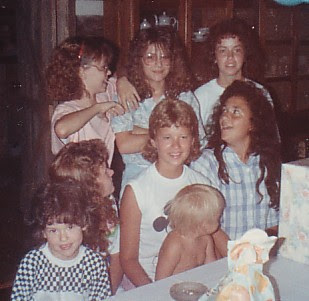 i'm thirtyfreakingtwo today. i don't have a lot to say about it, but i will say that i look a helluva lot better than i did twenty years ago and you're looking at a fine piece of photographic evidentiary support to back it up.
for those of you who know my sister, twig, that's her on the far left. and my now- twenty-one-year-old brother next to her in christy's lap. there are so many hilarious things going on in here, but sadly, all i can think to ask is, "mother, would it have killed you to take your daughter to the salon?". gee. zuz. i mean, i know we didn't have a lot of money and all, but i'd have to think that even the girl at the local head start could've done something. anything. i needed a trip to the salon much worse than whatever was in that big floral wrapped box. christy and i have long debated over which is worse - her femme mullet or my stringy mop.

instead of complaining or wallowing in self-pity about delving even further into thirtyhood, i think i'll divert from the ordinary, take a road less traveled and just say that i am [more than] well aware of the tremendous blessings in my life. i still spend every birthday the same way i did back when i was twelve: surrounded by really great friends. 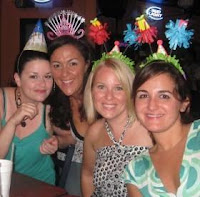 the faces in the photographs change (with the exception of my sister, who has no choice in the matter), but they are all friends with whom i laugh until i cry and instead of slumber parties, we have beach trips. i have two beautiful children who are truly the little apples of my eyes, a wonderful family, a really generous part-time job, a roof over my head, food on the table, health and happiness. i could go on and on. all my other rambling blogs can be taken with a big ole grain of proverbial salt, because deep down, i know... i really know... that my life is - despite the wierdness, the hurts, the regrets, the unpacked baggage, the experiences, the tragedies - my life is, at it's core, really beautiful. i'd be a liar if i said there weren't things that i would change if i could go back, but there is nothing i would change about this moment at thirtyfreakingtwo.