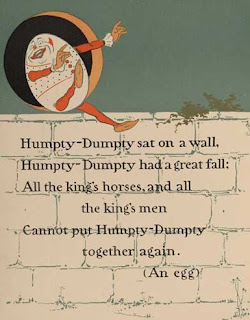 humpty dumpty: a childrens rhyme. a peculiar allegorical tale. or perhaps... as i can attest, an accurate depiction of our perilous fragility and profound lack of self-awareness.

and since i find it amusing to take humpty to new analogical heights, avoiding the true metaphor altogether, i have to inquire, what was the motivation for climbing in the first place? was it curiosity about what lied beyond the wall? perhaps he was simply sitting, diligently pondering. perhaps he needed a quiet place to compose the lyrics to the humpty dance, and consumed too much hennessy in the process. eventually becoming lost in thought and inadvertently, in balance. all the while completely oblivious to the fact that he was, after all, an egg.

we often ignore fragility in our lives, literally and figuratively. we have an innate sense of invincibility. taking unwise risks. making unwise moves. and unwise climbs. on the way down, we are unaware we are free falling into irretrievable brokenness. (or sometimes, irreconcilable differences.)

we chastise people for seeking to "find themselves"; those who want to know who [and what] they really are. and yet for humpty, even the most elemental hint of self-awareness might have led to self-preservation. instead, his exterior: shattered. his interior: splattered. and all that was inside, flowing out of the brokenness and seeping downward into the ground.
our hearts. our bodies. our relationships. in our naive humptiness, we often perceive them to be rock solid, but the truth is, they are all as fragile as an eggshell.
"peace and humptiness forever." digital underground lyrics
Email Post
Labels: life observations