the day after surgery... 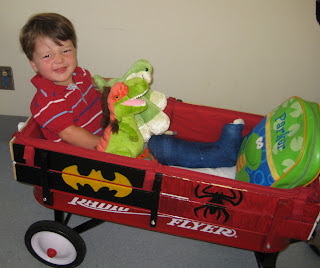 there is much philosophical wisdom to be gained from two year olds. the grin on his face says it all.
parker continues to amaze and consequently, dismay following his knee surgery. the doctor's orders were to keep his foot elevated for three days post-surgery (i.e. through today). insinuating that we were to keep him immobile as much as possible. without sedatives? riiight. every time i turn my back, he is barreling off across the floor or already out of sight completely, having escaped with his partner in crime who is more than happy to aid and abet. i have caught him trying to crawl up the stairs, scoot down the stairs, crawling off the sofa and back onto the sofa. other than lack of speed, he seems to be totally unhindered by the cast.
but it isn't his physical adaptation to the cast that is fascinating, but the obviously immediate emotional/mental aspect of it. he has not whined or complained about it once. in fact, he hasn't even mentioned it. it's as if he woke up from surgery and immediately accepted the cast, and consequent inability to walk, as part of himself. no transition period necessary. apparently, toddlerhood doesn't yet afford the extravagance of self-pity that we are accustomed to here in adulthood. no need to inquire about the hows or whys of what simply is. nor any trepidation about the future.

he has ten more days in the cast and i'm curious to see if his renewed ability to walk will be met with the same level of passivity. living in toddlerhood and thus, also having no concept of time, i know that he is oblivious to when or even if the cast will come off. yet he remains impervious, which is evidence (to me) that we are all innately equipped with the ability to not only see the "bright side", but only see the bright side. somewhere in our journey to adulthood, cynicism seeps in and erodes our natural defenses.
leaving the hospital, it felt as though the entire two day hospitalization had been a mini-adventure/vacation of sorts. a special overnight getaway that, because of his happiness, really was fun. even for me. as we left the room, the fact that he was unable to walk out, this seemed an insignificant side note and one that was completely eclipsed by the super cool wagon ride to the car.
if only we, as adults, could so easily [and happily] adapt to life's inconveniences. 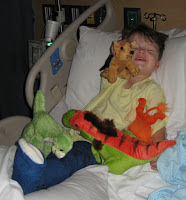