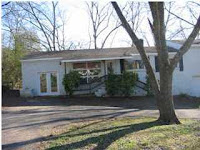 so. here it is. beloved home of my childhood. all but dilapidated. and by dilapidated, i mean the upper level master bedroom and lower garage portion (not fully visible in photo and which was an add on to the original structure) literally looks and feels as though it is on the verge of separating itself from the rest of the house. i had our realtor find out what he could and the worst was confirmed. there are serious flaws in the foundation. he went on to say that we could always inquire about repairs. he felt confident they would lower the price even further to compensate for it. now, i would be lying by omission if i didn't say that i wasn't still considering it. or at least considering the 'inquiring part' with contractors, etc. but somewhere deep down, my own [albeit unfamiliar] voice of reason spoke the proverbial nail into the coffin. it was time to let it go. it just needed more than i could give it. i just needed to let it go. and whatever reward i had ever hoped to gain in owning it, couldn't possibly be worth the time, the work and the cost that would go into restore it. it was past the point of restoration. it just needed to be torn apart and gutted.
it's not in the condition to be stored in my closet of broken dreams. i really have to let it go. and while, for the most part, my revisiting and wishful thinking has been lighthearted throughout the years, letting go, really letting go is proving to be a much more serious and excruciatingly painful experience.
to be continued...
Email Post
Labels: growing pains life unpacking