the fear of failure. and success. [part one]

30 months later. i have been hovering within five pounds [or less] of my goal weight for the last nine months.... 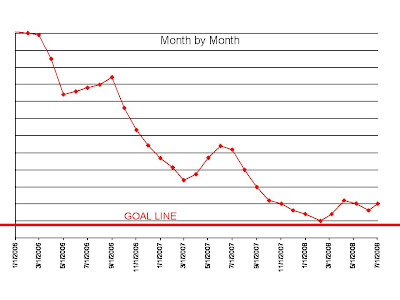 clearly, i have a problem with seeing things through to completion. an innate, yet indefinable, fear of reaching goals. some would define this as the fear of failure. it appears more to me as the fear of success. or some distorted mélange of both. oh, i'm perfectly competent with menial undertakings. i can hold a job, which perhaps, isn’t so menial. i have two children who are [albeit miraculously] happy, healthy, completely dressed and groomed at preschool. i have no difficulty completing work-related projects. i can plan showers and parties with immaculate detail and great success. and by all appearances, i clearly have it together. just ask anyone who doesn’t know me. i am what one might refer to as highly functional, under the circumstances of my obscured paralysis.

yet, when it comes to the more significant feats like college, weight loss, marriage… these proverbial paths in my life have been more than a little winding. what are simply “roads traveled” in the lives of some become full blown odysseys for me. relying on my own flawed instincts, i have more often than not, veered off the course completely and into a murky wilderness, where i (literally) “cannot see the forest for the trees”. i seem to like it there. most people would tend to be more fearful of the wilderness than of the path itself, but not me. i retreat into the dark, tall, willowy depths of mediocrity and stagnation. and i make myself at home. sometimes for a season. sometimes much longer.

for today, i’ll leave the educational and relational facets of my life in my: “hints, allegations and things left unsaid” file. [a title which is a direct plagiaristic steal from my favorite collective soul album.]

but the weight loss. fortheloveofblog, the weight loss! granted, it could be defined as success in and of itself, especially by my standards, that i’ve lost fifty five pounds and maintained the loss for nearly a year. or that i’ve been on this weight loss journey for a solid thirty months. i have no difficulty working towards something. i can focus with intensity and work with diligent relentlessness, but with the first indications of nearing the finish line or reaching a goal, come the first pangs of trepidation, a quiet uneasiness that intensifies with each step. i was a single pound away from my goal weight in february. one measly pound. 3500 unburned calories. for anyone else, it seems there would [and should] be an overwhelming sensation of joy. if you had asked me, twelve months prior to that, or even twelve weeks prior to that, what i would’ve expected to feel, my answer would have been ultimately, relief followed closely by uncontainable excitement. instead, i was absolutely wrought with anxiety and fear. and i’ve stayed comfortably within 3-5 pounds away from my goal weight since that day. that said,
what in the heck am i so freaking afraid of?